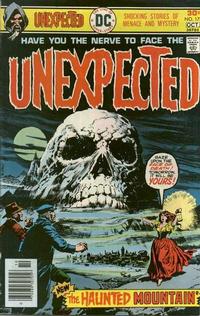 Appearing in "The Haunted Mountain"Edit

Synopsis for "The Haunted Mountain"Edit

Villagers throw a witch into a sulpher spring which burns off her face. In revenge, she converts a mountain into a skull which overlooks the village. This upsets the villagers, so they try to kill her once more but they only succeed in igniting underground gas which blows up the mountain and destroys the village.

Appearing in "Long Arm of Lunacy"Edit

Synopsis for "Long Arm of Lunacy"Edit

Retrieved from "https://heykidscomics.fandom.com/wiki/Unexpected_Vol_1_175?oldid=1465626"
Community content is available under CC-BY-SA unless otherwise noted.