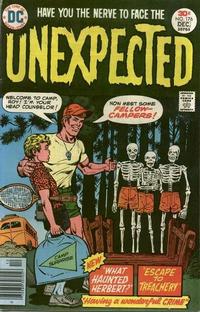 Appearing in "Having A Wonderful Crime"Edit

Synopsis for "Having A Wonderful Crime"Edit

A summer camp hazing goes wrong when one of the new kids bolts after witnessing a child buried alive and reports it to the camp councilor. The man tells him that he was likely the victim of a gag and when the other kids follow him back to camp they say they always dig Freddy up before he runs out of air. Unfortunately for Freddy, all three kids thought one of the others had remained behind to dig Freddy up.

Appearing in "What Haunted Herbert"Edit

Synopsis for "What Haunted Herbert"Edit

Synopsis for "Escape to Treachery"Edit

Retrieved from "https://heykidscomics.fandom.com/wiki/Unexpected_Vol_1_176?oldid=1465628"
Community content is available under CC-BY-SA unless otherwise noted.