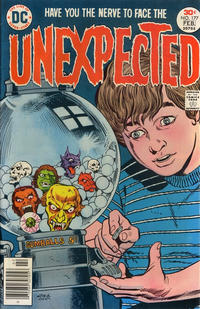 Appearing in "Reward For the Wicked"Edit

Synopsis for "Reward For the Wicked"Edit

A wealthy man hires three hunters to track his daughter who has gone missing. Two of them kill each other out of greed, but after discovering the woman has adopted a leper colony and wants to remain unknown, the third hunter decides to keep her secret.

Appearing in "Death is Dangerous To Your Health"Edit

Synopsis for "Death is Dangerous To Your Health"Edit

Synopsis for "Death Is the Prize"Edit

Retrieved from "https://heykidscomics.fandom.com/wiki/Unexpected_Vol_1_177?oldid=1465630"
Community content is available under CC-BY-SA unless otherwise noted.