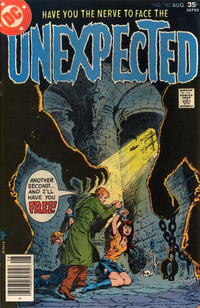 Appearing in "The Loathsome Lodgers of Nightmare Inn"Edit

Synopsis for "The Loathsome Lodgers of Nightmare Inn"Edit

A man gets a tip about an inn from a pretty girl, but has a harrowing experience when he arrives at the address. He escapes the madhouse and realizes that he read the address upside down. When he meets the girl again she informs him that he had unwittingly attended a frat house hazing. He breathes a sigh of relief, but unfortunately for him it is short-lived, as she turns out to be a vampire.

Synopsis for "Death Can Wait"Edit

Retrieved from "https://heykidscomics.fandom.com/wiki/Unexpected_Vol_1_180?oldid=758594"
Community content is available under CC-BY-SA unless otherwise noted.