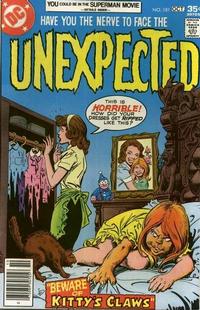 Appearing in "The Hum of the Haunted"Edit

Synopsis for "The Hum of the Haunted"Edit

A surgeon is tormented by a fly which follows him from his home to the operating theater where he is scheduled to operate on a foreign child. The boy's father warns the doctor should the boy die on the table he will hold him personally responsible. During the surgery, the fly hands on the man's hand causing him to make a mistake and the result is the boy dies. The doctor finally succeeds in swatting the fly, but only damages its wing. The dead boy's father pulls a gun on him threatening to take vengeance, but the fly flies into his eye distracting him long enough for the doctor to disarm him. The doctor brings the fly home to his wife in a jar as a new pet in reward for saving his life.

Appearing in "Web of Treachery"Edit

Synopsis for "Web of Treachery"Edit

Synopsis for "Beware of Kitty's Claws"Edit

Retrieved from "https://heykidscomics.fandom.com/wiki/Unexpected_Vol_1_181?oldid=1465638"
Community content is available under CC-BY-SA unless otherwise noted.