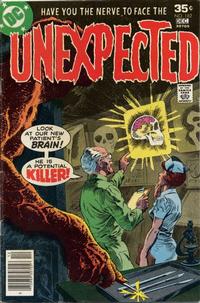 Appearing in "Sorry This Coffin Is Occupied"Edit

Synopsis for "Sorry This Coffin Is Occupied"Edit

A worker in a factory which produces coffins is startled when one of the caskets is occupied by the bruised and battered body of a young woman. His co-workers don't see the body and he suspects that he is the victim of a practical joke. That night as he drives home, a woman steps out from between two parked cars and he doesn't have time to avoid hitting her. When he gets out of the car and views the corpse he sees that it was the woman in the coffin he saw earlier. Witnesses collaborate his story with the police so they do not file charges. The next day at work, he feels relieved that he probably won't see the girl in the casket anymore in that it must have been some strange warning from Fate. He is terrified when he peers into the casket and sees himself lying there and in a panic he runs smack dab into the shop buzzsaw.

Appearing in "Flight to Frenzy"Edit

Synopsis for "Flight to Frenzy"Edit

After breaking into a closed diner, a vagrant is bitten by the supposed watch dog of the place. The town conducts an intense manhunt for the tramp, which ends a few days later, as the man is found dead by a denizen who had given him water. The cops arrive to collect the body, and clarify the circumstances of the case -- proclaiming the search was hastened by the fact that the mongrel was a rabies infected dog that escaped from the pound.

Appearing in "Two Graves For My Corpse"Edit

Synopsis for "Two Graves For My Corpse"Edit

A criminal facing imminent extradition, offers a random hobo $5k to perform a voltage powered medical procedure. The process transfers the two mens' brains, exchanging bodies and identities in the process. The criminal has the transient killed by one of his henchmen, and the body is discovered by authorities who identify it as the criminal. Later, an autopsy is performed, the coroner examines the brain and notions that it is not a brain of a violent criminal. Police later catch up to the criminal as he is caught with his known dog.

Retrieved from "https://heykidscomics.fandom.com/wiki/Unexpected_Vol_1_182?oldid=1465640"
Community content is available under CC-BY-SA unless otherwise noted.