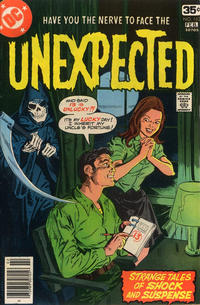 After a gambler notices that a man dressed in black writes in a small book twice at the scene of a death, he jostles the man's arm so that he drops the book and he can look for his rich uncle's name who he knows is dying of an incurable disease. He sees the name is scheduled to die in three days so he happily hands the book back to the scowling dark man. He borrows a thousand dollars from a gangster who threatens to rub him out if he isn't paid back, but he isn't worried because he thinks he can easily pay back the money with his inheritance. He forgot that he and his pregnant wife had named their child after the uncle and the baby is stillborn. The gangster rubs him out the following day when he can't pay.

Appearing in "Beware the Green Cannibal"Edit

Synopsis for "Beware the Green Cannibal"Edit

Retrieved from "https://heykidscomics.fandom.com/wiki/Unexpected_Vol_1_183?oldid=1465642"
Community content is available under CC-BY-SA unless otherwise noted.