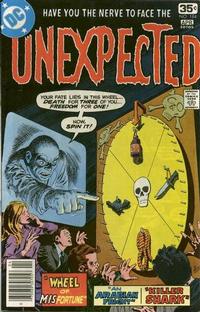 Appearing in "Wheel of Misfortune"Edit

Synopsis for "Wheel of Misfortune"Edit

A man who holds a grudge about unpaid debts captures four descendents of those who borrowed the money and forces them to spin a wheel to accept a gun, a rope, a knife and a bottle of acid. The men who get the knife and rope die, but the man who gets the gun and the woman who gets the bottle of acid realize they are supposed to use them upon each other. When they refuse, their tormenter confronts them directly and seizes the bottle from the woman. The man fires his gun shattering the bottle, killing the kidnapper.

Synopsis for "An Arabian Fright"Edit

Retrieved from "https://heykidscomics.fandom.com/wiki/Unexpected_Vol_1_184?oldid=1465644"
Community content is available under CC-BY-SA unless otherwise noted.