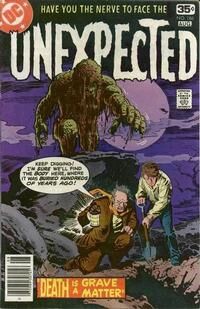 Appearing in "To Catch A Corpse"Edit

Synopsis for "To Catch A Corpse"Edit

A grave robber is startled when his intended victim turns out not to be occupying the casket so he acquires at the man's home a map which leads him to a cabin in the woods. It turns out the casket was empty because the man faked his death to avoid retribution from the mob. The ghoul attempts to blackmail him, but the man tips off the authorities and they setup the scene to make it appear he really did die by having him lie in his coffin. The mob boss is irritated by the run around he has received from the ghoul and plugs him. FBI agents apprehend him and the man leaves his coffin as a witness to the killing.

Appearing in "The Demon Fireball!"Edit

Synopsis for "The Demon Fireball!"Edit

Synopsis for "Death Is A Grave Matter"Edit

Retrieved from "https://heykidscomics.fandom.com/wiki/Unexpected_Vol_1_186?oldid=1465648"
Community content is available under CC-BY-SA unless otherwise noted.