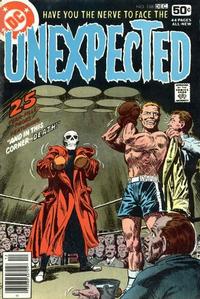 Appearing in "Verdict From The Grave"Edit

Synopsis for "Verdict From The Grave"Edit

A skeleton is discovered in the woods with identifying items. A man visits a medium to attempt to get a lead on the killer, but is startled to discover clues incriminating himself. He discusses the situation with his girlfriend and she tells him the medium is likely setting up him so he returns to the man, but is surprised once again to find him recently killed. He assumes that his girlfriend must have tried to get him to take the rap when the police show up. He eludes the police and makes it back to the girl. He manhandles her to get her to confess when he is hit from behind. When he regains consciousness, he is confronted by the man he thought dead. He reveals that he and woman have embezzled a large sum of money and plan to disappear after they arrange his "suicide". Their attempted victim knocks the gun out of his hand and subdues him. He turns them over to the police.

Appearing in "To Die of Laughter"Edit

Synopsis for "To Die of Laughter"Edit

A vile Jester, charms the King's Daughter, and faces the grim consequences of his trickery.

Appearing in "And In This Corner: Death!"Edit

Synopsis for "And In This Corner: Death!"Edit

A Whippersnapper lays down 10k on the underdog to win a heavyweight boxing fight.

Appearing in "The Locked Room!"Edit

Synopsis for "The Locked Room!"Edit

Synopsis for "Murder Can Be Fatal"Edit

A man is tormented in his new home, by the previous owners' spirits.

Retrieved from "https://heykidscomics.fandom.com/wiki/Unexpected_Vol_1_188?oldid=1465652"
Community content is available under CC-BY-SA unless otherwise noted.