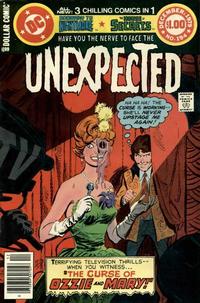 Appearing in "Have I Got A Ghoul For You"Edit

Synopsis for "Have I Got A Ghoul For You"Edit

A whiny gold-digger in search of a rich husband uses a computer matching service to find 'Mr. Right'. When the wealthy owner of the service refuses her advances, she makes it her mission in life to make him see her rolling in wealth. He *does* link her up with a husband, who she later discovers has great wealth because he robs the graves of the newly, wealthy dead! She joins him, only to have her plan ruined when she comes across the grave of the dating service owner, filled with cash but making all of her plans turn to ashes.

Appearing in "Home to Your Grave"Edit

Synopsis for "Home to Your Grave"Edit

A fugitive from the law in America is given a special shot by a doctor who is substituting him for a dead man who is being shipped back to a country in Eastern Europe; there, he will be awakened and be free... until he arrives and it is discovered by the doctor's agents that the man who had died was a heroic freedom fighter, and the people of his country want him preserved in glass forever! The fugitive 'awakens', frozen in un-death forever...

Appearing in "The Curse of Ozzie and Mary"Edit

Synopsis for "The Curse of Ozzie and Mary"Edit

Ozzie and Mary, a brother/sister act and darlings of the small screen, despise each other; each sees the other as the last stumbling block before 'the big time' can be achieved. One night, Ozzie visits with the special effects guy and tells him that he wants to 'get that rat and show the world who she really is!' A few days later, under the hot lights at the studio, Mary's face melts away, revealing the head of a rat! However, instead of screaming in fear, she begins to rant that the special effects guy had 'cheated' - as Ozzie has stepped into the light to show proper brotherly concern, his own face begins to melt... exactly the same way as Mary's!

Appearing in "The Dancing Dead"Edit

Synopsis for "The Dancing Dead"Edit

A bigoted white man and his more compassionate wife work on an Indian reserve where the natives symbolically 'dance with the dead' one night a year to celebrate the lives of those who have passed on. When his wife discovers that he has been skimming the food supplies and selling them on the black market, he kills her and covers up her murder. The next year, he is shocked to see that the Indians have made a dancing doll of *her* for him to dance with! He does so only at the behest of his friend, the local doctor, in an effort to make peace with himself. However, the 'doll' spins and twirls and dances with him so fervently that he dies of shock. The doctor is left to declare, with a shudder in his voice, that it's 'only a doll...'

Appearing in "Moonlight and Laughter"Edit

Synopsis for "Moonlight and Laughter"Edit

A man chased into the shop of Madame Xanadu by a rooftop sniper reveals a pentagram on his chest before transforming into a werewolf and lunging at her; however, he is killed by a silver bullet from the sniper before reaching her. The hunter is the son of a wealthy family whose fiancee was taken by a one-eyed werewolf some years earlier; since that day, he has invested all he can into silver-laced weapons (including fragmentation grenades) and dedicated himself to the slaughter of their kind. When his current girlfriend is kidnapped and held for a final confrontation, he goes to a graveyard loaded for bear (or, rather, wolf) and shoots, blasts and slashes his way through multiple foes; the one-eyed werewolf of years past is dispatched by a silver dagger in the eye. However, as the sun rises, the last werewolf alive is revealed to be his lost fiancee - turned instead of killed! He sees the pentagram on her chest, notes the one now risen on his own, and embraces her as he pulls the pin on his final silver grenade. In the end, Madame Xanadu collects *something* in a jar to go on a shelf in her shop.

Retrieved from "https://heykidscomics.fandom.com/wiki/Unexpected_Vol_1_194?oldid=1465665"
Community content is available under CC-BY-SA unless otherwise noted.