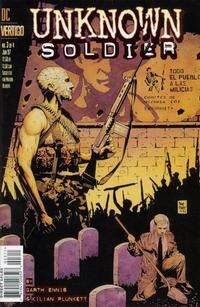 I have orders to execute anyone who lays eyes on me during a covert operation. But I will not take the life of an American soldier.

Retrieved from "https://heykidscomics.fandom.com/wiki/Unknown_Soldier_Vol_3_3?oldid=1465869"
Community content is available under CC-BY-SA unless otherwise noted.