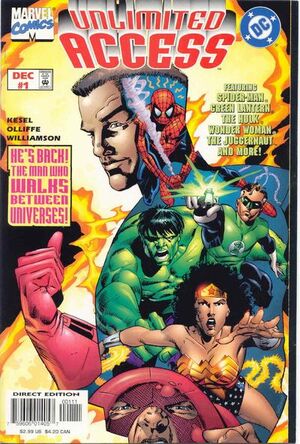 Access returns from an adventure with Batman and Spider-Man and, reverting to his identity as Axel Asher, discovers he's missed his lunch date with his girlfriend, Ming. Not understanding how he lost several hours, he finds her between classes and Empire State University and apologizes, revealing his dual identity to her, but, still angry, she doubts him. At that moment, Mantis attacks the school, and Axel activates his costume. He teleports Ming to safety as Spider-Man tries to tackle Mantis. Juggernaut and Wonder Woman also enter the fray.

Working together, Spider-Man and Wonder Woman defeat the villains, who are then mysteriously teleported elsewhere. Access is then surprised to learn that Diana does not recall having met him, but he provides the means to return her to her native universe. She flies away, and Access soon encounters the rampaging Hulk, who exhibits his savage persona, not the mind of Bruce Banner, as Access would expect. He offers to return the Hulk to where he belongs, but the nervous Access has trouble opening a portal. To Access' confusion, the late Hal Jordan Green Lantern intervenes. As Green Lantern subdues the Hulk, Access sees a discarded newspaper, and realizes he gone back in time.

Access then transports Hulk to the American southwest of the Marvel Universe. The behemoth leaps away, stranding Access, so he opens another portal, only to find himself in the Old West where he meets Jonah Hex and the Two-Gun Kid. Access sends Two-Gun to his home dimension, then accompanies Hex to a saloon. There, Hex is confronted by a vengeful gunman. To save the lawman's life, Access pushes him through a portal, but loses him between worlds.

Access then appears in a devastated New York City, accosted by Sentinels. However, the Legion of Super-Heroes arrive to defend him.