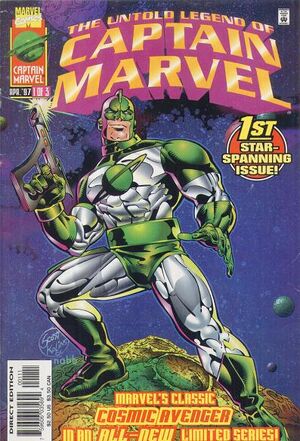 A famous hero Kree military hero has disappeared into the deadly Brood galaxy, and leading the mission to rescue him is a young, idealistic soldier named Mar-Vell! But others have designs on the missign Kree, namely the Skrulls and the Shi'ar! Plus: an early appearance of the Silver Surfer - still the the Herald of Galactus!

Retrieved from "https://heykidscomics.fandom.com/wiki/Untold_Legend_of_Captain_Marvel_Vol_1_1?oldid=1465770"
Community content is available under CC-BY-SA unless otherwise noted.