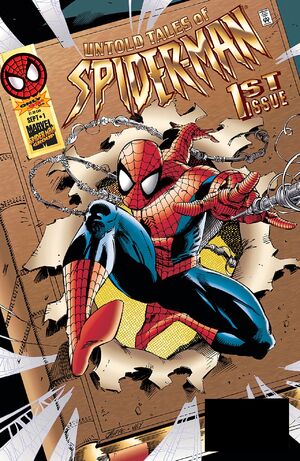 Appearing in "To Serve and Protect?"Edit

Synopsis for "To Serve and Protect?"Edit

This series about the early years of Spider-Man kicks off when a teenage Peter Parker, after hearing of a new criminal named the Scorcher, decides this would be a good opportunity to get some pictures he could sell to the Daily Bugle. The Scorcher (who has been stealing electronics plans from various companies and also possesses a state-of-the-art flame-throwing device) spots Spider-Man, and he and his henchmen turn their attentions to getting rid of the wall-crawler. During the battle a crowd gathers and, having been manipulated by J. Jonah Jameson's editorials in the Daily Bugle, assume Spider-Man is at fault. Some members of the crowd even try to attack him, and by the time Spidey gets back up to the scene of the fight the Scorcher and his strike squad are gone.

Peter thinks back on all the problems in his life as of late (the bills that Aunt May can not pay, the kids at school who would not leave him alone, and J. Jonah Jameson's borderline-libelous headlines), and wonders how his life got to be this way. Things almost make a turn for the better when Peter tries to ask out Betty Brant, but he is interrupted by the announcement that there is now a warrant out for Spider-Man's arrest. This, however, gives Peter an idea.

As Spider-Man, he swings over to a local police station, and there tells George Stacy that he would like to be a police officer. Captain Stacy tells Spidey that this would not work. After the web-swinger leaves, Stacy gets an idea of his own. He calls his sergeant to bring him the file on Spider-Man, as well as the file on the murder of Ben Parker.

Retrieved from "https://heykidscomics.fandom.com/wiki/Untold_Tales_of_Spider-Man_Vol_1_1?oldid=1719768"
Community content is available under CC-BY-SA unless otherwise noted.