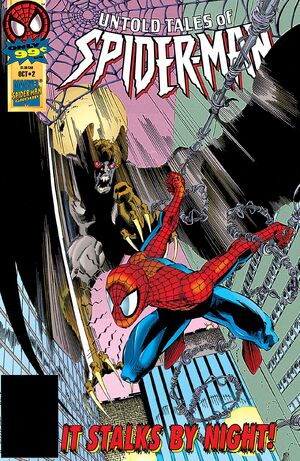 Appearing in "Castles in the Air"Edit

Synopsis for "Castles in the Air"Edit

Late at night, a city councilman, Randolph Cherryh, is attacked by winged creature while having a drink with a female companion. The next day, Peter Parker is mesmerized by the headline -- and the $25,000 reward for the creature's capture, an easily achievable task for his alter ego, Spider-Man.

While reading this edition of the Daily Bugle and running on campus, Flash Thompson trips Peter, sending him sprawling. He is ridiculed as usual by his classmates, while the largest jock of them all, Tiny McKeever, swimpes his math notes.

After some reassurance by Aunt May, Peter heads to the Daily Bugle, where, while on the edge of asking Betty Brant on a date, J. Jonah Jameson demands that he capture photos of Batwing (the nickname given by the press to the mysterious creature).

As Spider-Man, he visits the assaulted councilman, suggesting that they lay a trap for the creature. Afterward, Peter uses his wall-climbing and web-shooting abilities to take back his math notes from Tiny's bedroom. While hanging outside the window, Peter hears Tiny being verbally assaulted by his father.

Later, at a high profile party, Councilman Cherryh has successfully drawn out Batwing. Spider-Man is ready, and trails and corners the strange being. While Batwing's speech is limited, he presents a diary to the Wallcrawler. It tells the story of a boy who went with his father on a business trip to Carlsbad Caverns, the site of suspected illegal chemical dumping. While the boy survived, his father was apparently killed. The boy was transformed by the chemicals in the cave, but managed to return to his mother, only to be rejected. He ran away to New York.

Sympathetic for Batwing, Spider-Man allows him to escape before the councilman's eyes.

Peter then heads over to the McKeever household, offering to tutor Tiny in math.

Retrieved from "https://heykidscomics.fandom.com/wiki/Untold_Tales_of_Spider-Man_Vol_1_2?oldid=1719772"
Community content is available under CC-BY-SA unless otherwise noted.