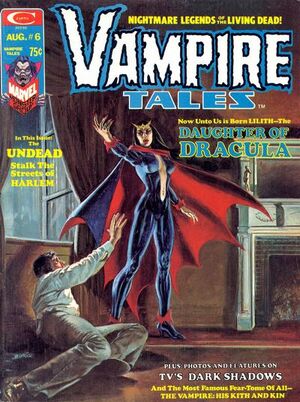 Appearing in "The Axe Man"Edit

Synopsis for "The Axe Man"Edit

Middle-aged George Crandall finishes watching an old vampire movie. The movie makes him realize how unfulfilling his life has been, and how he would love the opportunity to live forever as an undead vampire. He researches the matter and actually finds a classified ad submitted by an alleged vampiress named Mina. George goes to meet with Mina and asks her to turn him into a vampire. Crandall believes that the inherent weaknesses that comes with being a vampire (such as avoiding sunlight or fire) are a small price to pay for immortality. Mina does in fact turn out to be a real vampire and tells George that he will die, then rise from the grave in three days time. She drinks his blood and George falls over. Three days later at his funeral, George Crandall lies impatiently in his casket. He cannot wait for the opportunity when he will be able to rise from the dead as a vampire. Unfortunately, what he doesn't realize until it is too late is that his wife is having his casket cremated. George begins to pound on the coffin lid as it slides into the crematorium.

Appearing in "The Color of Crimson Gold"Edit

Synopsis for "The Color of Crimson Gold"Edit

Retrieved from "https://heykidscomics.fandom.com/wiki/Vampire_Tales_Vol_1_6?oldid=1465973"
Community content is available under CC-BY-SA unless otherwise noted.