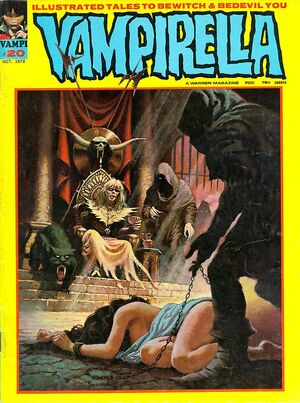 Appearing in "When Wakes the Dead"Edit

Synopsis for "When Wakes the Dead"Edit

Synopsis for "Love Is No Game"Edit

A grandmother curses a salesman when he boards for the evening at her house and sleeps with her granddaughter. The woman is blind but she keeps her dead husband's eyes preserved in a box which she hurls at the salesman. Shaken, he gets back behind the wheel of his car and soon has an auto accident in which he is blinded. When the old woman next opens her box, there are now two pairs of eyes within.

Two brothers get separated when an attack strikes their village. They both think the other dead, but one who had become disfigured in the attack becomes the new king's sorcerer and the other flees. When the king steals the absent brother's wife he comes looking for her and vows to kill the usurper. The other brother has had his voice removed by a spell and is ordered to alter the woman's mind so that she adores the king. The brothers meet once more as violence breaks out before he can cast a spell upon her. He doesn't want his brother to kill the king, as he fears that will render him permanently mute, so he leaps in front of the king only to receive a mortal blow from his brother. The brother succeeds in killing the king, giving his brother his voice back momentarily before he dies and he calls out his brother's name. The victor reunited with his wife assumes that he has heard his brother's ghost thanking him for slaying his murderer.

Retrieved from "https://heykidscomics.fandom.com/wiki/Vampirella_Vol_1_20?oldid=109750"
Community content is available under CC-BY-SA unless otherwise noted.