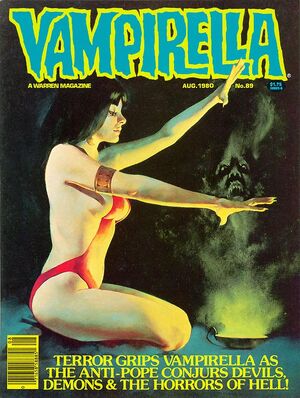 Appearing in "A Gathering of Wizards!"Edit

Synopsis for "A Gathering of Wizards!"Edit

Appearing in "Over the Edge!"Edit

Synopsis for "Over the Edge!"Edit

A brother desires his brother's wife so they come up with a scheme to make him commit suicide by using a robot to impersonate the wife in the condition of a gradually decaying corpse. The scheme succeeds when the brother leaps off lover's leap and they try to ditch the corpse-bot but the vehicle has an accident and the wife is killed. The corpse-bot still wants to have sex with the surviving brother.

A racist sets up an elaborate hoax to convince his blind wife she has been left on an island with black thugs who are trying to kill her because he thinks it will give her back to will to live with strength. She manages to kill two of the men she thinks are trying to kill her and asks her husband what about the men she killed. When he replies they were just Negroes, she orders her seeing-eye dog to kill him.

Retrieved from "https://heykidscomics.fandom.com/wiki/Vampirella_Vol_1_89?oldid=109819"
Community content is available under CC-BY-SA unless otherwise noted.