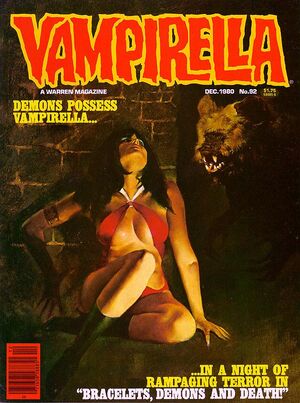 Appearing in "Bracelets, Demons and Death!"Edit

Synopsis for "Bracelets, Demons and Death!"Edit

Appearing in "That Future Long Ago"Edit

Synopsis for "That Future Long Ago"Edit

This story follows two characters, a woman who is convinced she is pregnant with the anti-Christ, and a dying old man. The old man is taught by hypnotism how to leave his body and, when he encounters the pregnant woman, he decides to enter the baby's body so that he can continue to live. The woman senses this infusion and takes it to be the Devil claiming his offspring. She stabs herself in the belly several times, killing herself. In the old man's home, they are surprised to find his bloody body with no murder weapon.

Retrieved from "https://heykidscomics.fandom.com/wiki/Vampirella_Vol_1_92?oldid=109822"
Community content is available under CC-BY-SA unless otherwise noted.