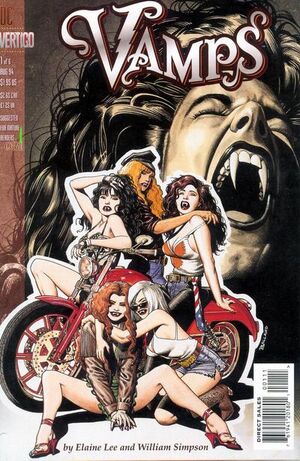 We were drunk, ourselves... not on the blood of a victim, but on wind and night and speed...

Five female vampires (Howler, Mink, Screech, Skeeter and Whipsnake) bring back some fresh human victims for their master David. After he becomes blood-drunk from the feast, the vamps decide they no longer wish to exist as his "brides", so they attack him en masse. They chain him to four motorcycles and tear him to pieces before driving a stake into what is left of his torso. Howler, the de facto leader of the vamps tells the other that they must scatter the remains in different graves. Afterward, they see one of David's surviving human victims, scrambling to get away. The vamps descend upon him and drink his blood.

Taking their motorcycles, the vamps drive on through the night until they cross the Alabama state line. Mink uses her whiles to convince a truck driver to give them a ride. They roll their bikes into the back of his meat truck and sleep inside frozen beef carcasses during the daylight hours. As day turns to night again, the Vamps leave the seclusion of the meat truck and slaughter the driver. They leave his body suspended from a meat hook in the back.

Their next stop is at a biker bar, where Skeeter entertains the patrons while the others select their next targets. Howler, who has consumed less blood than the others as of late, finds a biker and slakes her thirst. Afterward, they ride off until sunrise forces them to go underground.

The following morning, a private detective named Hank Gallagher finds the abandoned meat truck with the remains of the driver suspended in the back.

Retrieved from "https://heykidscomics.fandom.com/wiki/Vamps_Vol_1_1?oldid=1467445"
Community content is available under CC-BY-SA unless otherwise noted.