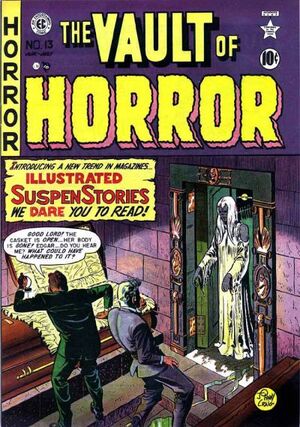 Appearing in "The Dead Will Return!"Edit

Synopsis for "The Dead Will Return!"Edit

1 of 4
Add photo
Florence and Bert had just finished dumping her husband's body in the ocean and made their way back to the lighthouse on the beach. She knew that her husband had a large sum of money somewhere around the house or on the property, and while she was searching outside for it, Bert heard a scream. Rushing to the beach, he saw that the body of Flo's husband has just washed ashore, so he took it and dumped it off the highest cliff in the area.....only to wash ashore again a few days later. Bert decided to take the body this time far up the coast, dump it and return. But Flo was worried and asked him to go back up the coast to make sure the body didn't wash ashore there. While he was gone, Flo remained in the lighthouse....then she saw water seeping under the door, figured it was her dead husband and began climbing the stairs to the top to get away from him. Just as Bert drove up, he heard a horrific scream from the top and the light go out on the lighthouse. He entered the structure, and saw a trail of water leading up the stairs, followed it, and then we hear a scream again. The next day, as government inspectors came to the lighthouse to investigate why the light was out, they found both bodies, covered in seaweed...then they notice a rotted corpse lying on the beach!

Appearing in "The Curse of Harkley Heath"Edit

Synopsis for "The Curse of Harkley Heath"Edit

Clayton Harkley had died from a mortal wound inflicted by his brother and left a dying man's curse upon the money he will inherit. The last members of the Harkley clan gather in the house to celebrate their new found wealth, when a knock at the door brings in their late uncle's lawyer, who informs the three that his money goes to Miss Sybil, a cousin....not to the brother! The two males decide to kill Miss Sybil with the same morphine that Uncle Harkley had once used...but Sybil knew they were coming for her and she had a gun. As they enter her room, they find her gone, and suddenly she darts out of the closet to shoot them. Unfortunately, she is stopped and injected...but with her dying breath, she promises to return from the grave to get both of them. They decide to leave her body in the house that night, then take her out and dump her in the moors the next day. Brother Edgar is fearful....so much so that Charles decides to kill him, but a falling chandelier takes out Charles just as Edgar looks up to see a very alive Sybil coming at him. He picks up a coal oil lamp and throws it at her....it crashes and burns the house to the ground, taking both of them with it.

Appearing in "Doctor of Horror"Edit

Synopsis for "Doctor of Horror"Edit

At the Hampshire Surgeon School, Professor LeMonet was called into the Dean's office and told that attendance in his classes was falling off, and if he was to remain as a teacher there, he must get more students to enroll. He went out and dug up cadavers for use in his anatomy classes, and enrollment suddenly blossomed. It drew the attention of the Dean, who told LeMonte that he was being promoted to Governor of the entire medical school and that LeMonte was in competition with another teacher to fill the position of Dean. When his competition comes to see him, LeMonte decides to murder him to get the job, which he does....but then he discovers that the newly appointed Governor is retiring because of ill health, and LeMonte sees an opportunity to get that position as well. He is told that if the royal surgeon determines that the school has progressed enough under Dean LeMonte, he will get that position. So LeMonte hires men to go out and kill people along the waterfront area, and bring their cadavers to the school to impress the royal surgeon.....unfortunately, the men make a grievous error, for LeMonte's body is among the other corpses!

Appearing in "Island of Death"Edit

Synopsis for "Island of Death"Edit

Steve Crane, along with his partner Alec, are flying over a small island, when the plane develops engine trouble and crash lands....Crane drags himself out of the water, spots a huge castle atop a mountain and manages to crawl up and knock on the door before he passes out. When he awakens several days later, he meets his benefactor, Count Cabeza, who provides a delicious meal before taking him into his trophy room. The Count shows him his animal trophy heads, but notes that he has yet to match wits with another type of animal: man! And Steve Crane is to be that man. The next morning, Crane is given a head start before the Count leaves to hunt him down with a crossbow. The Count uses his dogs to track Crane through the jungle, but loses the dogs when they fall into a pits with spikes! Crane lies in wait for the Count and charges at him when all of a sudden, a shot rings out, wounding the Count. The bullet comes from a gun held by Crane's pal, Alec, who was thought lost in the crash. The Count, now the hunted, accidentally walks into the nest of jungle wasps, which attack him from all sides, stinging him to death. Steve and Alec make their way to the coast, find a boat and sail away.

Retrieved from "https://heykidscomics.fandom.com/wiki/Vault_of_Horror_Vol_1_13?oldid=109853"
Community content is available under CC-BY-SA unless otherwise noted.