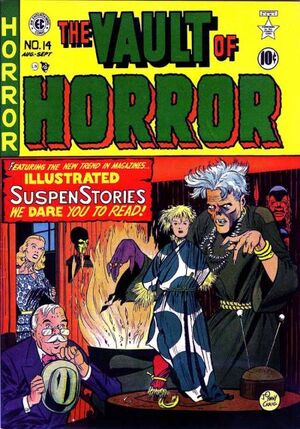 1 of 3
Add photo
Caleb left work early for a change, but on his way to the parking garage, he notices an antique shop he had never seen before....so he drops in to get something for his wife Sally, The weird proprietor tries to interest him in a voodoo doll, but Caleb refuses....but the owner insists that if he ever wants to kill someone, that he should get a voodoo doll from him. Shaken, Caleb arrives home only to find Sally in the arms of someone else, and both are scheming to get his money.....so Caleb returns to the antique shop and the owner makes a doll in the image of Sally for him. After paying for the doll and being told that whatever happens to the doll will happen to Sally, he takes the doll hom, where Sally sees it the next morning, really falling for it. But Caleb warns her it is delicate and not to touch it....ever, and he puts it up on a shelf. When Sally goes into another room, Caleb takes the doll and pokes it a few times with a pin....and he hears screams from the other room, so he knows what the shop keeper told him is true. Later, Sally tells her husband that she is going to see an old girlfriend, but he knows where she is going....so he grabs the doll by the head and breaks its leg....and the same happens to Sally. After her recovery, Caleb confronts Sally about her lover and a fight takes place. In her rage, Sally grabs the doll and throws it at Caleb....he ducks and it smashes against the back wall of the fireplace and the pieces are consumed by the fire. And what of Sally? Well, Caleb can only gasp in horror when he turns and looks at her!

Viktor Zorak is on a mountain-climbing expedition in Transylvania with the Smythe's and the Farnum's, all of whom are closely following their guide, Jan Bodzla. They reach the lodge they will stay in that evening, but the members are warned by Bodzla that he thinks Zorak is a werewolf and to be careful. Laughing it off, all go to bed.....but later Bodzla visits the Farnums and Smythes, giving them silver crosses and wolfsbane for their windows, since the next night would be the full moon. After completing the next day's climb and setting up camp, the full moon rises and Bodzla shows the others that Zorak's eyes have turned red and to be wary. Soon after all have retired in their tents, a blood-chilling scream is heard....discovering Zorak and Edna Farnum missing, they search and find her body torn to pieces. Then they spot the werewolf, which jumps at them....causing injury to all the men [but Bodzla] before it falls to its death. But Bodzla informs them that having been scratched and bitten by the werewolf means.....but he can't finish his thoughts as three werewolves bear down on him!

Appearing in "Rats Have Sharp Teeth!"Edit

Synopsis for "Rats Have Sharp Teeth!"Edit

Abner was the local historian who knew everything there was to know about everyone else in town...dead or alive. One night he visited the graveyard to dig up a corpse for the jewels a woman had been buried in, and as he opened the coffin, and saw the jewels, he also saw a rat....an animal he detested more than any other. He re-inters the coffin after getting the jewels and scurries away to his house, where he discovers, with more research, that some Revolutionary War tunnels exist under the graveyard from a cellar. So he decides to use them to get to the coffins of certain people from under the ground, where he cannot be seen as easily. Unfortunately, as he makes his way along in those tunnels, hundreds of rats scurry about, and follow him to a grave where he finds the moneybelt of Marcus Lee. Coming back the next evening, he discovers the belt gone.....and figures the rats must have carried it off. That's too much for Abner....he goes back home and builds a wire barrier to keep the rats away from the digging he is doing. And while digging one evening, the rats find a way to escape his wire trap and gnaw the timbers he has erected to keep the ceiling from collapsing. Suddenly, Abner finds that the tunnel is caving in on him.....and he has left his shovel behind.....and slowly he suffocates to death!

Appearing in "The Strange Couple!"Edit

Synopsis for "The Strange Couple!"Edit

A man is driving on a stormy night along a road when he is stopped by a state trooper, who tells him that the bridge ahead is washed out and he needs to take a side road instead to his destination, He does, but the car's engine stalls....but then he sees lights coming from a house and goes to it to phone for help. A weird couple inhabit the place....the man tells him that his wife is a crazy ghoul and she tells him that her husband is a vampire! The husband sends his wife to her room and he explains that she killed their dog and partially ate the body.....while later she tells him that he husband killed the dog and drank its blood. Unnerved, the man heads for bed....but pushes the headboard against the door and retires...fully dressed! He falls asleep, but is awakened by a panel in the room opening, and the eerie pair coming at him! Then....he awakens in his car, believing this to be a strange dream......then he drives his car on until it stalls, and he sees a light coming from a house, which looks strangely familiar. And when the door opens, he sees.....the same weird couple that he had dreamed about a few hours earlier!

Retrieved from "https://heykidscomics.fandom.com/wiki/Vault_of_Horror_Vol_1_14?oldid=109854"
Community content is available under CC-BY-SA unless otherwise noted.