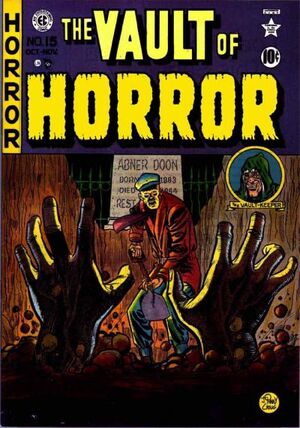 Henry is called on the carpet by his editor for always being late getting his stories in on time. Having an idea for a new story, he heads for his apartment....just as he gets down to work, a gang of friends shows up and literally takes over the place. He packs and heads for the country, and finds a nice, secluded house in which to work, and he buys Wilford Manor.....a home considered haunted. As he finishes his story, his gang of friends show up....and he leaves them there while he takes his manuscript into the city. His friends set up a scary reception for him when he comes back....the noises, screams and so on literally scare Henry to the point of death, and he flees the place. Meanwhile, his friends are celebrating, having carried off this ruse....when, suddenly something appears and scares them. A few hours later, Henry returns with the Police and they find a man dead in the drive, another hanging inside and a lady who has become a babbling lunatic. Deciding he has had enough of the country and solitude, Henry returns to his city apartment and a new set of friends....never to be alone again!

Appearing in "Terror in the Swamp!"Edit

Synopsis for "Terror in the Swamp!"Edit

As two men paddle their way up the Okefenokee Swamp, they spot a man onshore asking them to go no further unless they never want to be seen again. They enter the man's cabin and he tells them about three people: Professor Carl Ward, Marie Ward and Robert Colby, who built a laboratory in the area, and who were trying to discover the "spark of life." They tested element after element without success, and finally the professor threw the beaker of matter into the swamp. However, the matter mixed with the elements in the swamp and began to live and grow, uncontrolled, devouring creatures left and right. Colby confessed what they were trying to do was wrong and as he stormed out of the lab, the mysterious matter attacked and devoured the entire cabin, with the professor and his daughter still inside! The story finished, the man the two wayfarers not to continue on....but they did, and soon they came face to face with the living matter, which devoured them as the old man had warned!

Appearing in "Report from the Grave"Edit

Synopsis for "Report from the Grave"Edit

The town undertaker, Fred Coombes, convened the session of the Vault-Keeper's Club in order to initiate a new member, Warren Lake. In order to be sworn in, he must exhume the body of the recently departed member, note the time on his wristwatch and report back to the club President. He does as he is told, but reports back that this whole thing must be a joke because the coffin contained nothing but rags and bones. Not believing him, all the members return to the cemetery.....but discover the corpse inside the coffin had to have been buried 50 years ago. One of the members, Vardy, had originally protested the digging up of the coffin in the first place, and since he had once roomed with the deceased, the members accuse Vardy of having killed his roommate. Vardy laughs and tells the members that they cannot prove anything....just try and find the deceased member's body! Just then, a muffled explosion is heard and a large gravestone topples over, and the members discover the body of Willie Balm, the deceased member, and Vardy quickly confesses. When asked why the explosion had occurred, the undertaker mentions that he had forgotten to drill holes in the casket to allow the gases from the body to escape!

At a two-bit carnival patrons were asked to ante up 10 cents to see Zobo the man who stays buried under six feet of earth for 8 hours, but the crowd walks away, believing the guy is a phony. Later, his girlfriend Rita digs him up....then goes off on a walk and meets an illicit boyfriend. But Zobo follows her and has it out with her when she returns....but she convinces Zobo that it is all a sham to rake in dough from the guy she is seeing. The plan is for Zobo to break into this guys' house while he is romancing Rita....the guy will slug Zobo and Zobo will begin his shallow-breathing routine [that he uses underground], and the guy will think Zobo is dead. Then, he'll be blackmailed by Rita to prevent the "murder" from becoming known. Zobo agrees and the plan works out perfectly and Zobo is buried, awaiting Rita to come back and exhume him. She doesn't return...but a stranger comes along and digs him up in time. Then Zobo confronts Rita.....but then quietly tells her to pack all their stuff, for the carnival is moving on. Once packed, Zobo suddenly grabs Rita, nails her into the coffin and takes the coffin to a pool of quicksand, and dumps it in. Unfortunately, Zobo learns too late that he nailed his coat inside the coffin lid and he goes down with Rita!

Retrieved from "https://heykidscomics.fandom.com/wiki/Vault_of_Horror_Vol_1_15?oldid=109855"
Community content is available under CC-BY-SA unless otherwise noted.