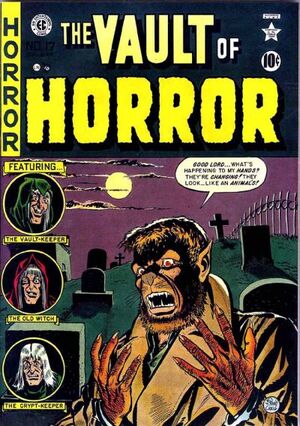 Appearing in "Terror on the Moors!"Edit

Synopsis for "Terror on the Moors!"Edit

1 of 4
Add photo
Jim Ryan is driving his car through dense fog along the bumpy moors, but decides to stop for safety sake and seek refuge in an estate he spots. The owner, Andrew Clymore, lives alone with his servant, Evers, and agrees to give him a room for the night. While at dinner, Ryan hears a scream, but Clymore says he heard nothing....and Ryan thinks maybe he needs to get some sleep. As Ryan climbs the stairs, Evers is coming down with a covered platter that reeks of rotting human flesh. Ryan is shown to his room, across from a room whose door is barred. Curious about it, Ryan gets up in the night and listens outside the door to a strange scratching from his....and he also hears moans coming from Clymore's room. Later, Evers appears and tells Ryan that his master is dead.....looking at Clymore's body, Ryan thinks the poor man had been frightened to death. Anyway, Evers tells Ryan that the master wanted to be cremated on a funeral pyre, but he was now too old to build it....so Ryan agrees to do it....that is, after the pouring rain ceases. Meanwhile, mysterious sounds keep emanating from the barred room, and Evers finally reveals that Clymore's wife had been subject to catalepsy, dies and was buried.....but when Clymore visited the tomb, he heard sounds from the coffin and discovered that his wife had given birth to a creature of some kind, and it was in that barred room. Suddenly, the thing broke out of the room. Ryan tried to shoot it, but the pistol misfired, and he was flung against the wall. As he awakened, he saw the room afire and the creature flitting wildly around the corpse of Clymore, snatching pieces out of his face with its teeth. As the flames grew more intense, Ryan made his way out of the house before it burned to the ground and drove off.

Appearing in "Baby -- It's Cold Inside!"Edit

Synopsis for "Baby -- It's Cold Inside!"Edit

Barton Gordon is making his way through a blinding snowstorm to answer a want ad for a superintendent and he comes to the run-down apartment house mentioned in the ad. He is told by a resident that the new owner, Marcus Kingsley, doesn't supply heat to the tenants, so Gordon decides to visit him. He is shocked by the gaunt, yellow-skinned man who owns the place, and Gordon is told that the man hates furnaces.....but he will be well paid and must do the man's shopping for him. A day later, Gordon is once again talking to Kingsley, when he notices a ring on the man's finger, and reaches out to touch it....but Kingsley screams at him not to touch him. Gordon leaves to do some errands, when he notices a refrigeration truck outside, there to install frozen-food locker compressors in the owner's apartment. Deciding the man to be mad, Gordon decides to leave his employment and seek another job. But, on that sweltering day, Gordon notes the machinery upstairs has stopped, and Kingsley calls for Gordon to come up to his place. Kingsley tells Gordon to fix the electrical system quickly....but can't do so. As a visitor arrives at the apartment, they hear a shriek and the sound of a body falling. Heading for the apartment, the visitor explains that Kingsley had cancer of the heart, was operated on to remove that heart, but Kingsley remained mysteriously alive....in freezing cold temperatures. But now.....as they approach the man's apartment, they note an oozing, decaying flesh flowing out from under the door!

Appearing in "The Beast of the Full Moon"Edit

Synopsis for "The Beast of the Full Moon"Edit

A werewolf has killed again and Tom Kellogg heads to his brother's residence with his girl June, noting strange animal-like footprints outside his door. Inside, Andrew wants to avoid his brother, but Tom vows to watch Andrew's every move that evening, following him outside at night, hearing a scream, then being attacked by a werewolf. Tom is able to pull out his knife and stab the creature in the hand before he faints. When he awakes, June is there but the werewolf is gone....and he heads back to Andrew's home, where he finds his brother inside, with an injured hand! Tom decides to lay a trap for the werewolf and lay in wait with a gun loaded with silver bullets. Tom watches as Andrew jumps out the window of his room and follows, seeing the werewolf fall into his trap....but as he nears the pit, a hairy hand reaches out and grabs his leg. He is pulled in, without his gun, but is saved by a silver bullet fired from above, which kills the werewolf. Climbing to the top of the pit, Tom sees Andrew....and as he looks back into the pit, he sees the body of his girlfriend, June!

On the island of Haiti, George Baker seeks out a certain shop that will make him a voodoo bust of himself. The owner obliges Baker and begins to work on the bust. Later, Baker has a change of heart and wants to cancel the order, but when he arrives again at the shop, the bust is finished and paid for....and as Baker walks out of the shop, it disappears, replaced by a brick wall! Returning home, Baker places the bust on his fireplace mantel.....and as the years go by, the bust begins to age...but not Baker, who remains youthful, and George hates to even look at it any longer. One day, a girl comes to his door, asking the whereabouts of another person, and George directs her down the hall....but secretly, he wants her. Later he discovers that this girl, Jean, is the daughter of one of his older employees, and he flatly tells the man that he wants to marry his daughter. That evening at dinner, George makes his move and she complies.....but, as the years go by and she ages, George does not, and the horrible bust over the fireplace continues to age. Jean hates it and is ready to get rid of it when George walks in, tells her to leave it alone, slapping her for good measure, and calling her an ugly old hag. While he is out for a walk, Jean gets a machete and severs the bust in two, while elsewhere a horrible scream is heard and a Policeman finds the body of George in the park....split down the middle! Back at the Barker home, Jean suddenly notices that the face of the bust now has taken on the youthful appearance of her husband!

Retrieved from "https://heykidscomics.fandom.com/wiki/Vault_of_Horror_Vol_1_17?oldid=109857"
Community content is available under CC-BY-SA unless otherwise noted.