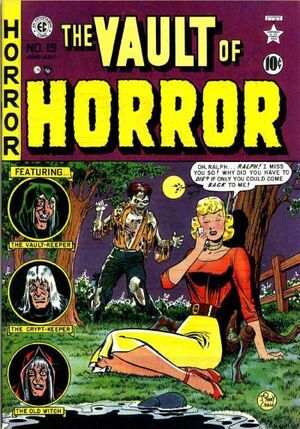 1 of 4
Add photo
Abner Scanlon was a gigolo who disliked work and preyed only on rich women. Unfortunately for him, he marries a young girl from one of the South's richest clans, only to discover that she has NO money at all, but said so not to dishonor the family name. Greedy for money, Abner sells an antique vase of the family and begins living it up, leading to a violent out-burst against the family and dear old great-great grandfather Jackson, which results in his wife's Aunt dying from a heart-attack. Soon after, another such episode occurs, wherein Abner takes great-great grandfather's picture out of a valuable frame in order to see the frame, leading to the death of her Uncle. Abner's wife, Claudia, runs tearfully to her room.....and later she hears a scream coming from the attic. She enters to find Abner dead on the floor, pierced by a sword....then she glances at the picture of her military great-great grandfather resting above Abner.....and notes the sword is missing from its hilt!

Charles and Howard Norton, of Norton's Pharmaceutical Company, are having an argument. It seems the company has received an order for one million hypodermic inserts for insulin, but can only make 500,000. Not wanting to lose the order, Charles muses that they could dilute each insert by half, and thereby still provide the one million inserts. Howard, the company's chemist, refuses, calling it criminal, and Charles calls him a spineless jelly-fish! Without the knowledge of Howard, Charles dilutes the inserts and fills the $20,000 order. Later, many diabetic patients begin to die and it's discovered that the inserts have been diluted....but it is Howard, the chemist, who goes to jail! Howard spends the next few years working in the prison lab on a secret formula, and when he is released, he goes to see his brother Charles. Still acting the weakling, Charles offers Howard a drink, and when Charles isn't looking, Howard slips a "special" pill into Charles' drink. The two make a toast and Charles downs his drink....with horrific results!

Appearing in "Daddy Lost His Head!"Edit

Synopsis for "Daddy Lost His Head!"Edit

Young Kathy cannot figure out why her stepdad, Martin Blackson, hates her so much, although we discover it's because she looks so much like his wife's first husband, and that he's jealous of that man. When Kathy finds next door neighbor, Mrs. Thaumaturge of interest, Martin runs out and tells Kathy to gather up some wood, and leave that "witch" alone....or she'll "bake her" in her oven! Soon after, Kathy's mother passes away, and things grow worse for Kathy....until Mrs. Thaumaturge gives Kathy a surprise: a candy doll in the shape of a man. Although Kathy swears she'll never eat it, that evening her step dad sends her to bed without supper while he goes out to the woodshed to cut wood. Kathy decides to take a bite out of her doll's left hand, then hears a horrible scream come from the woodshed, where Martin has cut off his left hand. When he hears about the doll from Kathy, he demands that she hand it over to him....instead, Kathy shows Martin that the doll isn't evil and....bites off its head!

Young Lillian was much too young when she married Waldo, and, soon, his age began to show. One night at a party, she met Roger, fell in love and agreed to get a divorce from Waldo. Unfortunately, Waldo fell ill with polio and needed constant attention....and Lillian told Roger she just couldn't go through with the divorce. Before bidding adieu to Roger, both agree to meet at the lake five years later....and five years later, they do meet, kiss and bid adieu for another five years since Waldo still needed her. The years drift by and the two meet by the lake once again, with the same outcome: they'll meet again in another five years. This time, Waldo finally dies by the end of the second year, and Lillian decides she can't wait for Roger, so attempts to find him. However, she discovers that Roger was horribly killed in a train wreck just after he and Lillian had met two years earlier. Three years later, despondent, Lillian visits the lake for what would have been their next meeting date....and she looks up to see the rotting corpse of Roger Kane walking toward her, and they caress.....soon after, Roger's decaying corpse and the recently deceased, but smiling body of Lillian, are discovered by the lake.

Retrieved from "https://heykidscomics.fandom.com/wiki/Vault_of_Horror_Vol_1_19?oldid=109859"
Community content is available under CC-BY-SA unless otherwise noted.