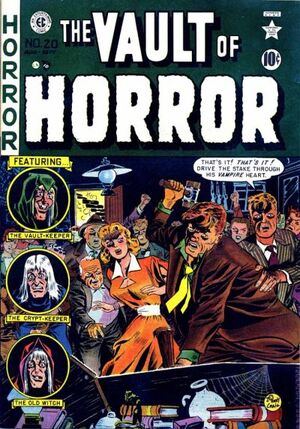 1 of 3
Add photo
Lydia was a circus lion tamer and considered the best, until one evening she was attacked and severely injured by a black panther. After her recovery, she took to wearing a veil because her face had been disfigured, and literally retired from the world. She began to pour over books on witchcraft, hoping to find a solution. Without realizing it, her chauffeur, Steve, began to act as if the disfigurement to her face didn't matter, and Lydia hoped this meant someone could love her for what she was. One evening, however, she took her veil off for him and he froze....but he didn't flinch. Slowly, but surely, he found a way to legally take her money and run off to Florida, taking up with another woman. Lydia swore revenge and took her books on witchcraft off the shelf again, worked up a special cauldron of fluid, dropped in her picture and Steve's...then she waited. Soon, the cauldron ceased boiling and the removed pictures were blank. Lydia looked in the mirror and saw her face had been restored.....but, in Florida, Steve's new girlfriend was suddenly approached by Steve, whose face had become rotting flesh!

Appearing in "The Reluctant Vampire!"Edit

Synopsis for "The Reluctant Vampire!"Edit

As the last rays of the sun retreated in the sky, a coffin opens and out steps Mr. Drink, vampire, who quickly hurries to his job as night watchman at the Blood Donor Center. Drink has used this job to secure his daily supply of blood, then he'd doctor the books to make everything appear legitimate. But this evening, the record book was missing....and he was forced to go out and kill someone to replace the blood he has supped on so that he would not be found out. Upon returning to the center, Drink discovers that the blood center is to be closed down unless the facility takes in twice the amount of blood it does now. So Mr. Drink decides he must act....by killing more victims and stocking the shelves with their blood. But the center's director, who has been awarded a medal for getting so many donations, has been reading the papers about all the recent murders in the neighborhood, and when his secretary reports new pints of blood mysteriously showing up in the center, they conclude that Mr. Drink is a vampire and responsible for the killings. He reports the information to the Police and they find Drink's coffin....and drive a stake into his heart through the medal for increased blood donations that was wrongly given to the director!

Little Peggy is awoken from her sleep by her Grandmother, who is having a heat attack. She asks for her pills, but they are not to be found on the nightstand, and by the time Peggy finds them in another room, her Grandmother has passed away. After the funeral, Peggy's Aunt Helen and Uncle Lawrence were celebrating with each other, thinking they have inherited all of the old woman's money. But at the reading of the will, they learn the money goes to Peggy....at the age of 22....so they plot to kill her. Meanwhile, Peggy is seeking out the friendship of the gardener, who pays more attention to her that her aunt and uncle. That evening, Peggy tells her "new folks" that Grandma came to see her and told her that the gardener was a fine man to associate with....but her aunt and uncle say NO! The next day, all three go on a picnic and Uncle Lawrence sees an opportunity to push Peggy off a cliff. Unfortunately, he goes over the cliff instead when Peggy "sees" her Grandma and moves out of the way. Later that day, Aunt Helen is already counting the fortune as hers, and grabs Peggy by the arm to the basement, opens the furnace door to push her in when Peggy sees her Grandma again.....as does Helen....and Helen falls back into the flames! Peggy then becomes the responsibility of the gardener.

Appearing in "Revenge is the Nuts!"Edit

Synopsis for "Revenge is the Nuts!"Edit

At the eerie Croydon Insane Asylum, horrible screams are heard as patients are being whipped, and as Mr. Aldershot, a relative of a patient, is in Blackpool's office in response to a letter from his patient-relative. Blackpool tells him that these people are filled with evil spirits and his "treatments" are the only way to deal with the patients...and he kicks the man out. Blackpool then retreats to the dungeon-basement area and has the patient taken back to the ward, where the other patients are shocked by what has happened. As days drag by, Blackpool continues to tease and mistreat the patients, unknowing that the patients have decided to strike back. That evening, as Blackpool sat in his office, the door bursts in and the patients drag him to the dungeon, and to the cell of an insane patient named Olaf [many times maltreated himself], and gleefully watch as Olaf tears him apart!

Retrieved from "https://heykidscomics.fandom.com/wiki/Vault_of_Horror_Vol_1_20?oldid=109860"
Community content is available under CC-BY-SA unless otherwise noted.