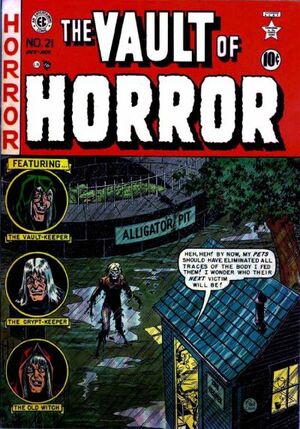 Appearing in "One Last Fling!"Edit

Synopsis for "One Last Fling!"Edit

1 of 8
Add photo
The knife-throwing act in the little theatre in Hungary was extremely popular, but the couple was glad to be moving on to Paris the next day. When Harry woke up the next morning, he couldn't rouse Olga, who was very pale and he thought was dead. After making burial arrangements, he returned home and found Olga missing.....suddenly a bat flew in the window and changed into the missing woman before his eyes. That's when Harry discovered Olga was a vampire. She asked for protection, and Harry decided the act would change and head for the U.S. where they would play one-night stands. Even though people died mysteriously in every town they played in, they aroused no suspicion, but the whole thing began to get on Harry's nerves. He decides to lock her in their room and not let her kill again....but instead, Harry became her victim. Weakened to the point of not being able to do their act, he allowed her to leave the room....but she continued to feed on him, until one night, at the end of the knife-throwing act, he announced he was going to commit a murder, then threw a wooden stake at his wife's heart before collapsing in death on the stage!

Appearing in "That's a 'Croc'!"Edit

Synopsis for "That's a 'Croc'!"Edit

1 of 3
Add photo
At the local zoo, people crowd around the newest attraction: a pit with four crocodiles in it, and along comes Mr. Coogan, the zoo keeper and lover of these ferocious animals, to feed them their daily ration of meat. But when a young boy reminds him that these animals are MAN eaters and maybe they don't like being fed other types of meat, it makes him stop and think. That evening, he heads to town and kills someone and feeds them to his charges. Meanwhile, at the home of Norman Simms, family members discover him to be missing and they begin to backtrack his steps to locate him, without success. Back at the zoo, "Crazy" Coogan is over-seeing the cleaning of the crocodile pit when one of the men, Lou, discovers a ring on the floor and pockets it secretly. Later, in town, Lou stops in for a drink and sits down next to Norman Simm's relative, who has just learned others have disappeared in town mysteriously....then he sees Simm's ring on the finger of Lou, who tells him where he got it. Two and two are added together, and the angry men in the bar head for the zoo to confront Coogan. When Coogan sees them coming, he jumps into the crocodile pit, thinking these creatures will protect him.....instead, they devour him!

As a group of boys were playing football in front of Mr. Collin's house, they were rudely told by him to get away from the front of his home or he'd call the Police. So they moved down the street, but when the football accidentally fell into his yard, he wouldn't give it back. Later. Collin's wife, Emma, gave it back to the boys when Milton was asleep.....but he found out and slapped his wife around. The next day, as the boys were passing by the Collin's home, they yearned for some apples off his tree, but when they attempted to get a few, he came out, took his belt off and was going to hit them when his wife came out to put a stop to it.....and Collin's struck her instead. The next day, feeling sorry for Emma Collins, the boys waited until Milton left and then went to the door to surprise her with some candy.....but they were told she was dead. The next day, they watched the funeral and interment from a distance....and then plotted to scare the pants off Mr. Collins. That night, as Collins was resting on his back porch, he glimpsed movement in the darkness and an eerie voice, purporting to be that of his wife, began calling to him. As he walked out into the yard, a ghostly apparition suddenly appeared, asking him why he had killed her. He apologized for doing it, then pitched forward....stone dead!

Inside a moving railroad boxcar, Marty rolled over and grabbed his black bag as he spied a new person inside the car. Just as they passed the Smoky Mountains, and the stranger told Marty that those parts were deserted because the area was haunted, they heard a noise and saw a rail policeman nearing them....so they jumped from the train, killing the stranger. Marty got to his feet and began walking in the chilly air until he came to a farmhouse, occupied by an old man. The man invites him in....but Marty kills him as he is telling Marty that he has lived there for ten years and feels like he is a part of the land. Marty drags the corpse out and buries it, then begins to explore the crude farm he had commandeered when a tree falls, nearly hitting him. He runs back to the house, followed by a mysterious fly that had appeared while he was burying the old man.....a fly who buzz sounded like a scream! Marty grabs some flypaper out of a cupboard and catches the fly on it....but decides the place IS cursed, so he grabs his bag and runs out of the cabin....right into the wet earth where he had buried the old man. Marty found his feet strangely stuck to it and he pitched forward into it. The more he struggled, the tighter he was held.....just like he was caught in flypaper!

Retrieved from "https://heykidscomics.fandom.com/wiki/Vault_of_Horror_Vol_1_21?oldid=109861"
Community content is available under CC-BY-SA unless otherwise noted.