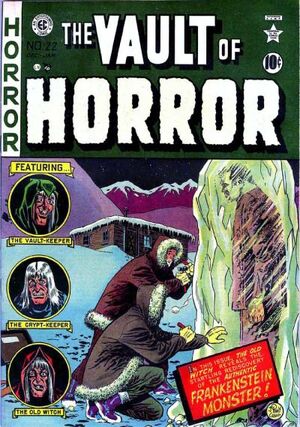 Appearing in "Fountains of Youth!"Edit

Synopsis for "Fountains of Youth!"Edit

1 of 4
Add photo
Eileen reads an ad in the newspaper asking for a traveling companion for a Madam DuBois, who traveling abroad. Her brother Ken is not too happy with the idea, but Eileen goes and sees the DuBois, who wears a heavy veil over her head, and who accepts Eileen for the job. Eileen gets packed and seen off by her brother....she and Madam DuBois then board a cruise ship. Unfortunately, Eileen gets seasick and Madam DuBois has her lie down in her cabin, where she takes the young lady's hand and begins singing softly to her. Eileen begins to waste away and die, and when Ken hears the news, he's determined to get to the bottom of it. He travels to see Madam DuBois, who no longer wears the veil, but doesn't believe her story of what happened to Eileen. The next day, Ken sees an ad in the paper, again asking for a traveling companion for DuBois. Once one is secured, Ken follows her and books passage on the same ship....and sure enough, a few days later, the new young woman has come down with a strange illness. Ken visits the doctor and tells him of his suspicions, so the ship's doctor orders the young woman to the ship's hospital and Madam DuBois locked in her room. The doctor informs him that Madam DuBois is similar to a human vampire, who prolongs its life by sapping the youth of their victims. By the time the pair get to DuBois' cabin, she is already withering and dying before their eyes!

Appearing in "The Monster in the Ice!"Edit

Synopsis for "The Monster in the Ice!"Edit

As Gerald Dawson sits as his desk in a shack in the Arctic, Herbert Campbell enters, telling him that their Eskimo guide refuses to take them any further. Dawson goes to see Lomo in his igloo, and the Eskimo tells him of the monster in the ice, and that no one who sees it comes back in their right mind. Dawson & Campbell rig up a dog-sled and go to the site, spot the monster and dig its ice-encased body out and take it back to their shack. They show the body in ice to Lomo and he freezes in fear, especially when he is ordered to chip the body out of the ice! While that is happening, Dawson and Campbell kick back, telling themselves that this whole thing reminds them of Mary Shelly's book about Frankenstein. Suddenly, they hear a scream and a crash, and enter the adjoining room and see the window broken out and Lomo shaking in fear. Now they know the creature must be put back into the ice, so they go out and dig through the ice to water, and they hope to lure the monster into the trap. The monster shows up....jumps into the hole and drags both men down with him. One year later, the U.S. Air Force decides to build a base near that very spot and two airmen happen to spot the bodies trapped in the ice. So......they start digging out the bodies to see what they can determine what happened to them.

Maxwell and Steven's car rolled up to the water's edge, and they got out to unload their equipment. Max was a noted sport-fisherman, but Steven hated the sport, which he considered cruelty to animals. Max outfitted his reel with the latest gadgets and cast into the water....soon he got a strike and reeled in his beauty. Steven, sick to his stomach, went back to the car and drove off. Max cast again, but then realized that the car contained the sandwich he had brought for lunch. But he spotted a candy bar lying on the beach and reached over to pick it up and shoved it in his mouth, never noticing the thin, silky, nearly invisible thread attached to it. It grew taut, and pulled Max into the water, just as Steven drove back up to the site. He got out, wondering where Max was....then he saw the horrible sight of Max bobbing up out of the water....being drawn farther and farther out to sea!

Appearing in "What the Dog Dragged In!"Edit

Synopsis for "What the Dog Dragged In!"Edit

As she sat in her wheelchair, Betty, her blind eyes seeing nothing, reached out for her dog Jerry, put a list in his collar, and sent him to the butcher's. The dog had to get there ASAP so that the butcher could get her order to the house before Betty's housekeeper arrived to cook for her. Unknown to her, Jerry was hit by a car on the way, but was alive and taken to the home of the driver, wealthy Roger Cartwright, where he cared for the dog. Meanwhile, Betty's housekeeper arrived....but was getting perturbed because the groceries had not arrived as yet. Then Betty heard Jerry's bark and he came into the house and jumped into her lap, followed close behind by Roger. Betty was happy to have company and invited him back, which he did....and they soon grew quite close. One day, as Roger left her house in his car, he didn't see the truck coming from the other direction...... The next day, when Roger didn't show up, she sent Jerry after him.....and day after day Jerry returned.....without Roger. Until one day Jerry came in and Betty petted him....but pulled back, feeling unearthly soil and smelling putrid, rotting flesh in the house. Yes....THIS time Jerry had brought Roger back....it's just too bad that Betty's blindness kept her from seeing the rotting corpse of Roger standing in her doorway!

Retrieved from "https://heykidscomics.fandom.com/wiki/Vault_of_Horror_Vol_1_22?oldid=109862"
Community content is available under CC-BY-SA unless otherwise noted.