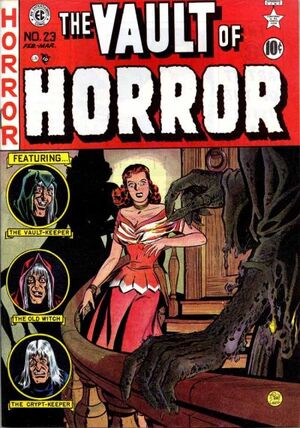 Appearing in "A Stitch in Time!"Edit

Synopsis for "A Stitch in Time!"Edit

1 of 4
Add photo
The scene opens in an old-fashioned sweatshop, run by a Mr. Lasch, who makes the women work 14 hours a day, 6 days a week, for a salary of $6! The machinery is out-dated and dangerous, and Lasch treats the women like slaves. Suddenly, a woman screams and Lasch goes over to her and discovers the sewing machine has shattered, injuring the woman's hand severely. Unsympatheitc to her, Lasch charges her for a new machine against her salary, and tells her not to go to the hospital....that is, unless she wants to go the "scrap box!" This place was where scraps of cloth and thread were thrown were someone would have to untangle it all and re-spool the thread....a job that usually drove the woman insane. Then, another woman faints and Lasch berates her to get up and go to work, eventually slapping her, then firing her. As she leaves the business, the other women look out the window to see her hit and killed by a car....then they turn on Lasch, threw him on a sewing machine and began pounding him until a fire suddenly breaks out. But Lasch couldn't move, as the flames grew closer, because the women had sewed his mouth, hands and legs together. He stumbles around, falls into the "scrap box" and becomes tangled in more thread, and is forced to watch as the fire closes in on him!

Life had been good to Ernie ever since he had become manager of the Hudson Soap Company, and his predecessor, Benny Anderson, had disappeared. He suddenly remembered a date he had with a showgirl, although he couldn't remember her name, and ran off the the bathroom to clean up. He discovered that he had no soap EXCEPT the many cakes of soap in his kitchen cabinet....soap he couldn't use because it contained the remains of Benny! Still, as he took one of the cakes of soap anyway, he mused about how Beeny had been his boss, really giving him a hard time in the soap plant....until one day he knifed Benny and threw his body in the rending vat, and made bars of soap out of him. The best thing is that no one could prove what had really happened to Benny. Yessir, Ernie was on easy street, as he drank a toast to Benny, then removed his robe and entered the shower. After lathering up, Ernie made the mistake of rubbing his eyes....they were set on fire and he fumbled at the faucets, accidentally turning off the cold water. Now in scalding hot water, he reaches for the shower door, but slips on the soap and breaks his leg. As the stall begins to fill up with water, Enie reaches for the handle to the shower door again....but it's just out of reach, and the stall fills up with water, drowning Ernie. Later, when he was found, it was noted that the soap was clogging the drain!

In an isolated plantation home on a tropic isle, a shot rings out and 'Red' Buckley's former plantation boss lies dead at his feet. In the shadows, a native, Kulu, watches Buckley get into the home's safe and him remove a black pearl, then they enter a boat for a three day trip to Banggai, then passage on a steamer. As the lights of the plantation fade in the distance, Buckley recalls the day four years ago he came to work there for a Frenchman named Duval. When Buckley hears Duval speak of a black pearl, he decides he must have it, and arranges with Kulu for an escape route once he obtains it. As Kulu paddles down the river, Buckley tells Kulu he will be paid off at Banggai.....then 'Red' discovers that they are heading for a village instead. When Buckley turns around to question the native, Kulu kills him with a machete....and proudly walks into the village with HIS prize: a human head with red hair!

Appearing in "Staired... in Horror!"Edit

Synopsis for "Staired... in Horror!"Edit

Irma stared down at the grave of her late husband and smiled....just as a gentleman came near to pay respects to his late wife. As the two conversed, Irma gleaned that this old boy must have money, so she struck up an on-going affair with this Mr. Hornsby, and plotted to have him murdered for his insurance.....just the way she murdered her first husband, Herman, for his! Soon, Robert popped the question and Irma accepted, and after their marriage, they went to his palatial country estate. But suddenly, as she looked up the carpeted winding staircase, the scene came back to her of the lighthouse steps she went up with Herman....and where she pushed him over the railing to his death! Soon the bickering started....Robert wanted to still visit his former wife's grave and Irma forbid it, eventually leading to his very ill health. Then one night, Robert bolted from his bed for the cemetery to visit his beloved Ethyl one more time, where he died from a fatal heart attack on her grave. Back at the estate, Iram was contemplating tearing out the spiral staircase when she looked up to see the the rotting corpses of Herman and Ethyl coming at her. She raced up the spiral steps to escape into the balcony bedroom when she remembered that she had had them sealed shut! In the morning, all that was found were the remains of two rotting corpses, and the body of Irma.....smashed into tiny little pieces!

Retrieved from "https://heykidscomics.fandom.com/wiki/Vault_of_Horror_Vol_1_23?oldid=109863"
Community content is available under CC-BY-SA unless otherwise noted.