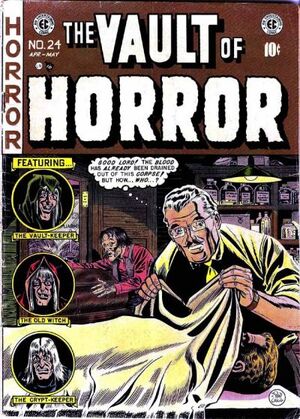 Appearing in "A Bloody Undertaking!"Edit

Synopsis for "A Bloody Undertaking!"Edit

1 of 4
Add photo
Gilbert headed for his car after arriving by train, but noticed a young woman [Wilma] coming out of the shadows and asking for a ride. As they rode along, Podges mentioned that he had considered retiring, but had just lost his assistant and couldn't. Arriving at her destination, she gave Gilbert a seductive kiss....a kiss that led to a marriage proposal and their marriage a few days later. Unfortunately, business at Gilbert's funeral home kept him too busy to go on a honeymoon, but Wilma seemed to understand....that and his excessively long hours at work. The next day, a Mr. Charlie Drayne applied for the position Gilbert was seeking to fill, and he was hired. Strangely, all of the blood Drayne took from the corpses during embalming disappeared....about the same time news headlines were screaming about a vampire killing. Soon after, the funeral business slowed down, and Charlie Drayne was going crazy hoping people would start dying. This bothered Gilbert, but Wilma told him it wasn't anything to worry about....but the newspapers continued to report vampire killings. The townspeople figure Drayne is the vampire and come after him and kill him. Later that evening, as Gilbert came back to his funeral home quite dejected and saw Wilma leaning over one of the bodies. Suddenly, she turned, fangs bared, and jumped at Gilbert!

Appearing in "With All the Trappings!"Edit

Synopsis for "With All the Trappings!"Edit

People were starting to leave the town cemetery after the burial of Emile, and Pierre swore to Maria that he'd never be buried like that....his body being left to the worms and crawling things. With winter coming on and in need of money, Pierre set out more trap lines than ever before, a concern to Maria. Before he left to cover them, Pierre looked over the materials he'd just received on metal vaults. Three days later, after returning home, he found Maria dead on the floor, and went into town to check out those metal vaults, and discovered they cost $300......a year's worth of trapping for Pierre! Sitting at home dejected, with Maria's body near him, Pierre decides to put her in the ice house for preservation until he can raise the needed funds. Trapping that winter proved financially sound and Pierre went to town and ordered the vault and a funeral service for Maria, then happily headed home. As he entered the ice house to get her body, he froze in horror as he saw a lynx, which had stripped Maria's body of its flesh!

Appearing in "Impressed by a Nightmare!"Edit

Synopsis for "Impressed by a Nightmare!"Edit

As Fred poured himself a cup of coffee, Emma told him that she'd had a nightmare about cutting her finger, and she couldn't stand the sight of the blood. He told her to forget it, but, sure enough, after he left, she cut her finger....just like in the dream. That night, she dreamed her little girl tripped and fell....and she did the next day. The next night she dreamed their son had an auto accident and that happened as well. Fred said that it was all coincidence....but when she dreamed next that her husband fell into the rollers of the giant printing presses at work, she sprang out of bed to stop him from going to work, only to discover he was already gone. In a panic, she ran down to his work site and rushed into where the presses were, and saw Fred atop the gigantic machine. When he heard her, he turned, slipped and fell into the printing press rollers!

Appearing in "The Death Wagon!"Edit

Synopsis for "The Death Wagon!"Edit

Herman surveyed the beat-up car and told the man he wouldn't buy it, but when the man said he HAD to sell it, the price offered was a low $400. Once the deal was made, Herman, and his partner Amos Sink, took the car inside, rolled back the odometer, packed the transmission with sawdust and poured grease into the radiator....all to mask the auto's problems. Similar alterations were also done to other cars on their lot that they had purchased for a song. One day, an assortment of patrons came in and purchased these junkers, and all were involved in accidents....and the deaths of innocent people. Herman and Amos were visited soon after by a Police inspector, who threatened to get a warrant to examine all of the cars on their lot. To avert this, the pair spent nights fixing up every car on the lot....unaware that the dead, rotting corpses of their "victims" were moving in on them. The next morning, when the inspector returned with his warrant, the only car he found on the lot was an auto with the heads of Amos & Herman where the headlights should be, their eyeballs became parking lights, their hands became door handles, then ashen-white skin had become seat covers, and their other body parts elsewhere in the vehicle. This was truly a Kitch and Sink car!

Retrieved from "https://heykidscomics.fandom.com/wiki/Vault_of_Horror_Vol_1_24?oldid=109864"
Community content is available under CC-BY-SA unless otherwise noted.