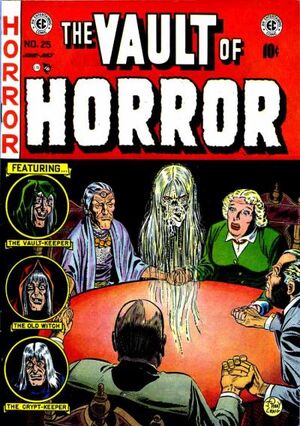 1 of 4
Add photo
John Chalmers hands over his check for $20,000 to several confidence men [unbeknownst to him], mentioning to them that Madame Gilda didn't approve. The fleecing to Chalmers continued for a while until one day, as Chalmers entered the office of the two men and overheard them call him a sucker. Knowing he had been cheated out of his money, Chalmers told them that he'd see his lawyer first thing in the morning and he'd take action against them. The two men follow Chalmers and force his car off a cliff, and later visit Chalmer's wife to pay "their condolences". She tells them that, with her husband gone, she's thinking of withdrawing his money from their firm, but she must have a seance first to talk it over with her dead husband. The two confidence men rush over to see Madame Gilda and arrange with her to make sure "Mr. Chalmers" tells his wife to continue the business arrangement, sliding a great deal of cash her way! One of them will even played the late husband's spirit. That evening at the seance, an eerie figure appears, walks over to the confidence man and chokes him to death. Madame Gilda stands up and rushes in back of a curtain and finds the other confidence man......choked to death, with a look of terror on his face!

Appearing in "Kickin' the Gong A Round!"Edit

Synopsis for "Kickin' the Gong A Round!"Edit

Marko had worked his way from the slums to a pro boxing career, and easily knocksout his last opponent before the championship match he'd waited to fight in. Marko returns home to his wife and little son when suddenly he has two visitors that pull a gun on him and take him away to the training camp of the man he is to fight next: Jake Houseman. Houseman offers to pay Marko any sum he asks to lose that fight, but refuses and is allowed to leave. The night before the big fight, Marko is ready for the bout when his wife enters and tells Patty his son has been kidnapped, and the note tells him to lose that fight...or else. He tells her that he'll do as they ask, but that he WILL get even. The next night, Marko takes a terrible beating....and falls over in the 7th round....dead! Six months later, at Houseman's training camp, a rotting corpse bursts through Houseman's door, forcing the champ to run outside, where he sees all of his men slaughtered. The corpse of Marko then drags Houseman to the sparring ring and proceeds to rip Houseman to shreds with his bony hand!

Being a wealthy sportsman, Fred Hamilton booked passage to the Belgian Congo for a hunting expedition, which was successful, and now he on his way home with B'uuna, his servant, to wed his finacee, Louise, who was at the dock to meet him. Upon their arrival at the apartment, B'uuna performs a rite of the Black Magic Cult he belonged to before he could enter. Louise presented B'uuna with a present: an Easter egg with a scene of a rabbit & tiny eggs inside. He thanked her, but sensed something wasn't quite right. Later, Louise told her hubbie-to-be that she wasn't going to quit modeling after the wedding. And they began to joke around, using slang that B'uuna overheard, but didn't understand....but he took it as her not wanting to really marry his new master. At the time grew late, Louise left the apartment for home when she was grabbed from behind. Fred was awakened out of his slumber inside the apartment by B'uuna's chanting in the hall, then he entered with the egg in his hand. To Fred's horror, B'uuna handed him the egg, and he looked inside.....to see his fiancee where the rabbit had been!

Anna had always loved animals and one day she saw a stray cat and brought it in to feed, but Jonah didn't approve of her habit of taking in every stray animal she came across. To get even at Anna, Jonah started his new hobby: taxidermy, and his first "patient" was going to be the mouse running around their home. He caught it, stuffed it, then went outside to lure a squirrel, then a bird, and then a dog to practice his craft on. Anna screamed at him until she was blue in the face, but it did no good. One day Jonah came to her and said that his collection of stuffed animals was almost complete....he smiled and left. Meanwhile, Anna kept calling the cat she'd found a few days earlier, then, when it couldn't be found, realized what her husband had meant. Running to the basement, she found the cat freshly stuffed.....with a crazed look in her eye, she turned toward Jonah, knife in hand, and told him that his collection still lacked one more thing. The next day, a neighbor found Anna in the basement, babbling incoherently, stroking her stuffed cat, and sitting next to.....her stuffed husband!

Retrieved from "https://heykidscomics.fandom.com/wiki/Vault_of_Horror_Vol_1_25?oldid=109865"
Community content is available under CC-BY-SA unless otherwise noted.