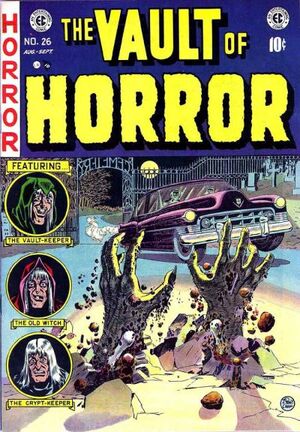 Appearing in "Two of a Kind!"Edit

Synopsis for "Two of a Kind!"Edit

1 of 8
Add photo
The huge ocean liner pulled into the pier with many photographers waiting to snap a picture of camera-shy Willow Dree. In the past, attempts were made to photograph her....but all the photos showed were backdrops behind her, but she was never in any picture taken! Just then, they were informed that she had snuck off the ship and was already in her penthouse apartment....an apartment that strangely had NO mirrors. Her co-star, Brad Phillips, met her that evening on the set, as she would rehearse only at night. They had dinner at her apartment and then he convinced her to take the weekend off. She told him to pick her up the next evening as she liked to sleep all day long, and he agreed, the next evening heading to a ski slope. Secretly, Brad was lamenting to himself that he was going to have to kill her, and she the same about him. Suddenly, a blizzard came up and the two stumbled around until they spotted a cabin, entered and then discovered the next morning that they had been snowed in. Willow began getting paler and more sickly from her lack of blood, while Brad suffered some "accidents" to parts of his body. A week passed.....and suddenly the roof collapsed from the heavy snow. When rescuers finally dug their way in, they found Willow on a bed, having drained her own blood and a wooden stake protruding through her heart, while Brad was found next to her.....at least what was left of him, since he had eaten most of his own flesh!

Appearing in "Graft in Concrete!"Edit

Synopsis for "Graft in Concrete!"Edit

1 of 3
Add photo
Hornsby gruffly entered the Mayor's office and nearly threatened the Mayor to get the road contract he was after, but Mayor Applegate told him the City Council would vote on that tomorrow at the regular meeting. But Hornsby had an ace up his sleeve....he had a document that proved the Mayor had gotten a kickback on the sale of land the new school was being built on. The next day at the meeting, the council members did a little double-dealing of their own. Since the new road would go through much of Hornsby's property, another member demanded the new road also go through his town cemetery, or he wouldn't vote "yes" on the proposal. Agreeing to this, the council gave Hornsby his road, and the next day, bodies in the cemetery were supposed to be exhumed and moved to another part of the cemetery....but Hornsby and the cemetery owner did some under-handed dealing.....the bodies would stay where they were, and only the monuments and headstones would be relocated....no one being the wiser! Soon the new road was done and the council members all loaded into a car and took a drive on it. However, when they got to the cemetery, they suddenly saw a hand emerge through the concrete......and then bodies began rising up and walking toward the now over-turned car. The next morning, state troopers discovered the empty car, with the area all around the car neatly paved. And as they looked more closely, they discovered the bodies of the council neatly inset into the road's fresh new pavement!

Zachary was the undertaker in town and was at the door of an apartment, whose tenant had called him. As he entered, the odor of incense was almost over-powering as the person inside said to keep the light off. He informs Boxer that he visited his doctor not long back and was told he had some sort of mental problem that he needed professional help with. And the psychiatrist inform this man he had schizophrenia and needed therapy on a regular basis. Even with this, the man's spells caused him to do things he normally never would, as his dark side became more and more predominant. Then it happened....he went in for his normal session, and, an instant later, saw the psychiatrist's mutilated body lying at his feet. He decided to leave the country for Haiti, went to see a voodoo witch doctor and asked him to destroy his evil half. The witch doctor created a doll....half evil and half good, and stuck a pin through the evil half and told the man it had been destroyed. As the man finishes the story, and turns on the light, he tells Boxer the reason why he was called: to embalm his rotting, evil half of his body!

Appearing in "Hook, Line and Stinker!"Edit

Synopsis for "Hook, Line and Stinker!"Edit

In their living room, Stanley was telling his fiancee about the fish mounted on a plaque above the fireplace, and thanked her for caring for all of his trophies. But she wanted to talk about their 15-year romance and when they were going to get married. After Stanley left, she turned and looked at the mounted trophies, remembering back to the day she first met him, thinking how much she despised those trophies and the fact he was gone every weekend to go fishing. This Saturday, however, she decided to go into the country for her usual weekend stroll, when she heard Stanley's voice....and that of another woman, who were on a picnic together. Listening carefully, Bernice learns that Stanley has been lying to her all along, faking fishing trips to be with this other woman, Emma. She rushes back to her home in tears and awaits Stanley's return on Monday....with yet another trophy. As Stanley turned his back on her while telling another phony fishing story, Bernice pulls out a knife, tells him that she "hooked" him 15 years earlier, that Emma can't have him, and drives the blade deep into Stanley's back. When Bernice's maid came in the next day to clean, she found her in front of the fireplace with a new trophy hanging above it: the bloody body of Stanley mounted on a plaque!

Retrieved from "https://heykidscomics.fandom.com/wiki/Vault_of_Horror_Vol_1_26?oldid=109866"
Community content is available under CC-BY-SA unless otherwise noted.