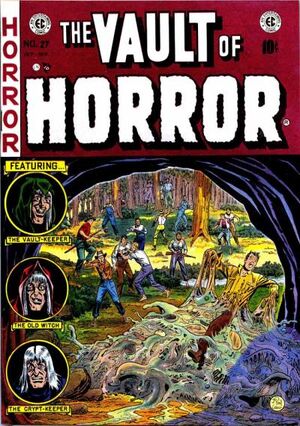 Appearing in "Silver Threads Among the Mold!"Edit

Synopsis for "Silver Threads Among the Mold!"Edit

1 of 4
Add photo
Cedric was working late tonight, putting the finishing touches on his latest statue, and told Christine to relax. His model was a woman he wished to marry, but she wasn't ready. Anyway, he told her he'd have a big surprise for her the next day, and when she walked in, he showed her a huge vat. He was going to sculpt a life-size statue of her, then put it in the electroplating vat in order to produce a silver-plated statue. He never noticed she wasn't the least bit thrilled, and when he returned to his studio later, she was on the phone with someone....and he followed her to the park, where she met with her secret lover, Gary! Together they plotted to take him for his money, then get married....the next day, Cedric confronted her with the news that he knew, and she stormed out. When she didn't show up at her lover's house, he came to Cedric's studio looking for her....but it was like she disappeared. Then one day in the studio,Gary noticed a life-sized silver statue of Christine and bought it from Cedric. At home, Gary admired it....and later accidentally fell against it, knocking it against the wall. The hand fell off....then he saw a rotted human hand underneath the metal. Trembling, he chipped away the metal from the head....and found the rotting corpse of his beloved!

Appearing in "People Who Live in Brass Hearses"Edit

Synopsis for "People Who Live in Brass Hearses"Edit

The children ran up to the hearse as Mr. Byrd drove by, yelling things at him as he made his way to the general store. They couldn't understand why a man, who was NOT an undertaker, would drive such a contraption. The townsfolk were scared of the man, who lived in a rented, deserted house. Whenever Lionel would come to town, the kids would look in the back of the hearse and only see a curtain partition, wondering what was behind it. The answer began when Lionel first moved to town....before he ever owned the hearse, and a couple of fugitives came by his house, looking to hide out from the law. When Lionel told them to leave, they shot him dead, and dug a grave to bury him behind the cabin. When they re-entered the cabin, there he was, holding a shotgun on them, and telling them they had killed his Siamese twin! As he stepped forward, they could see the dead corpse still attached to Lionel, who tied the pair up and threw them in the grave they had prepared for him. Now we know why Lionel had that curtain in the back of his hearse!

Appearing in "Strictly from Hunger!"Edit

Synopsis for "Strictly from Hunger!"Edit

The posse stood before the mouth of the dark cave, where they had trailed a creature that had killed ten of their own, stripping their flesh from their bones. Doc told them he'd seen this creature long ago....before it came to look like it did now. Pete came to see Doc with a lump on his arm, which he discovered was cancer, and he only had a few months to live. Dejected, Pete went to see the Old Hag up on Baldy Mountain, and she hexed him so that he'd never die....IF he'd agree to never ask her to un-hex him. When Pete returned later to see Doc, his arm had been taken over by the cancerous tumor....and slowly more of his body was taken over until all the healthy cells were destroyed and all that was left were cancerous cells gone wild. Just then, the oozing thing emerged from the cave, and the men threw searing torches at it until it retreated back into the cave. Then the men blocked up the entrance.....and prayed no one would ever uncover that entrance!

Appearing in "A Grim Fairy Tale!"Edit

Synopsis for "A Grim Fairy Tale!"Edit

Once upon a time, there was a tiny kingdom overrun with rats....they were everywhere. One day the people decided they'd had enough and proceeded to kill all the rats. Now, this kingdom was ruled by a pompous King and Queen, who lived in a castle surrounded by a moat....which the rats couldn't cross over. The Queen had pet white mice and enjoyed them immensely. One day, the Queen learned that the townspeople had nearly killed off all the rats, and, knowing they were related to her mice, forbid them to do so, and it became a crime to kill any rat! Soon, the rats overwhelmed the people again and ate all their food. Furious, the townspeople decided to act: they invaded the castle, captured the royal couple, shoved starving rats down their throats and sewed their mouths shut....and then watched as the rats ate their way out!

Retrieved from "https://heykidscomics.fandom.com/wiki/Vault_of_Horror_Vol_1_27?oldid=109867"
Community content is available under CC-BY-SA unless otherwise noted.