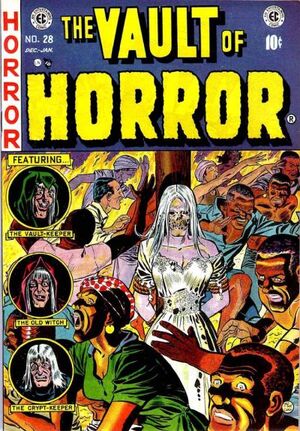 1 of 8
Add photo
Steve stands at the dock as the ship, carrying his bride-to-be, sails into port. After Donna disembarks, they hurry off into the interior jungle in Haiti and get married in a simple ceremony. Many days later, she falls ill, dies and is buried. Steve's servant, Jebco, tries to fill the void, but the despair is too great. But Jebco says there is a way to have her back, and secretly he removes the corpse of Donna from her grave and puts it through a voodoo ritual.....and she walks again....as a zombie! She returns to Steve, who is overjoyed....that is, until she begins to decompose. He tries in vain to kill her, then puts her in a helicopter, flies over the dense jungle and pushes her out. But several days later she strolls back, and he drinks poison to end it all. But loyal Jebco puts him through the same voodoo ritual, and he returns as a zombie....to be with his love....forever!

Appearing in "The Chips Are Down!"Edit

Synopsis for "The Chips Are Down!"Edit

1 of 3
Add photo
Sigmund was buzzed on his intercom that Colonel Turner was there to see him and his two partners, Henning and Field. The Colonel was there to tell them that their sawmill had been chosen ror a highly secret government contract to produce thin wooden discs, at a rate of 60,000 per month. They agreed, but then wondered how they could produce that many until Field arrived at a solution with a new type of saw. Later, Henning and Darby muse over a way to keep all the profits for themselves, cutting Field out by engaging him in poker matches and taking him to the cleaners by winning his share in the saw mill.....which they did. After he walked out of the game, he shot himself and was buried.....and as Darby and Henning walk away, they muse over the marked deck they had used on Field. What they didn't see was a rotting hand rising from Field's grave that followed the two back to the mill, where screams are heard. The next morning, the mill foreman walked into open up and saw Darby and Henning standing stiffly next to the cutting machine in a pool of blood. When he touched them, they fell over.....minutely sliced into thousands of thin layers!

Appearing in "For How the Bell Tolls!"Edit

Synopsis for "For How the Bell Tolls!"Edit

Long ago, in a far-away land, there was a castle which had a belfry and a large bell hanging in it. Every time there was a special occasion, the royal bellringer plied his trade, watched for over 34 years by his apprentice....but never given the chance to ring the bell once in all that time! On the Queen's birthday, the royal bellringer, now very old, was told to ring it all day long....but his apprentice wanted to do it. When he was told no, he pulled down an axe from the wall and killed the royal bellringer....just as the King walked in. The King sentenced him to death and wouldn't listen to the man's pleas to ring the bell....that is, until the Queen's birthday. The bell tolled loud and clear...but became more muffled throughout the day. Why? Because the apprentice got to ring that bell....his body was the clapper!

Appearing in "We Ain't Got No Body!"Edit

Synopsis for "We Ain't Got No Body!"Edit

The door to Norton's apartment exploded open and there stood the rotting corpse of Henry coming for him.....the man he and several others had killed. Norton shot the thing six times with no effect.....then asked for mercy. Henry reminded Norton of that day on the train when he and his two buddies learned that Henry had made Norton his beneficiary: for $20,000 with double indemnity. As the three discussed how to split up that money, Henry arrived and they all headed for the club car....but on the way, they pushed Henry beneath the wheels of the train and killed him. The train stopped and all that was found of Henry was his torso....nothing else. A month passed, and the head and limbs didn't turn up....but a check for $40,000 did, and as the three celebrated their new found wealth, they didn't realize that at the same time, Henry's department store was broken into and a mannikin stolen. Later, the limbs and head only of that mannikin were found....but no torso. Later....one by one of Norton's partners were found dead, torn to shreds by Henry. Now.....Henry finishes his story, telling Norton that the mannikin was needed by him to get around and get revenge on those who had killed him. The next morning, the body of Norton was found, torn to shreds like the rest.....and in his home, the torso of a mannikin. Across town, the severed limbs of Henry made their way to the cemetery....dug down to the coffin, smashed a hole in it....and soon were reattached to the torso of Henry Bodwin!

Retrieved from "https://heykidscomics.fandom.com/wiki/Vault_of_Horror_Vol_1_28?oldid=109868"
Community content is available under CC-BY-SA unless otherwise noted.