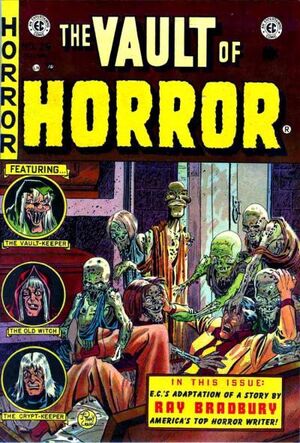 1 of 4
Add photo
Howard was admitted to the castle by its owner, Mr. Weatherby, to make an offer on the castle: to dismantle it and re-assemble it back in the states. Unfortunately, he wouldn't sell and Martin left. But Weatherby's nephew Nathan saw a chance to get some money, so he murdered his uncle, carried him out to the family mausoleum and buried him, then notified the authorities that his uncle had stepped into a quicksand bog on the property and died. The death was ruled accidental and Nathan inherited the castle and all property. He then contacted Howard Martin and sold him the castle, warning him that it was haunted. Much later, the groundskeeper notified Nathan that the mausoleum had disappeared from the estate. Meanwhile, the castle, having been rebuilt in America, hosted its new owner, Howard Martin, for his first night in the place....but he was awakened by sounds in the garden and looked out the window to see corpses re-building the mausoleum! He was overjoyed and wondered if they'd show up the next night, so he sat up to watch....and he saw Nathan Weatherby sneak onto the grounds and head for that mausoleum, where he was grabbed and taken inside by the corpses, who nailed him into a coffin. From that night on, Howard Martin entertained guests wanting to visit a "haunted castle", and they ate to the screams coming from the mausoleum.....Nathan's screams!

Mr. Howard returned to his classroom in time to see some of his students corner a young boy, who then fell out of a window to his death. Stunned, Howard resigned his position because he secretly now hated all children because of what happened. Seven years later, he resumed teaching after a fellow teacher friend of his died. He called his charges less than human....and they resented it. One day he came across some the kids "playing poison".....on sidewalks with names on them that they took for gravestones. From then on, Howard screamed at any kid even playing hopscotch on the sidewalk. One night, as he sat in his home, he saw a skull appear outside his window.....and he continued seeing it, night after night. One evening, he ran outside after the kids responsible, and fell into an excavation ditch. The kids covered him with dirt. In the days that followed, no adult paid much attention to the sidewalk square with the name "M. Howard R.I.P." on it......as the kids continued to play their game of poison!

Appearing in "A Sock for Christmas"Edit

Synopsis for "A Sock for Christmas"Edit

Long ago in a huge castle lived a King [Irving], his Queen [Matilda] and their only son, Tarby, who was a real brat! The King decides to go into the village and forcibly take another young lad to be the Prince's companion, hoping that would straighten him out. It didn't, but the King gave the Royal order that if Tarby acted up, the other young boy would be whipped instead....and he became the official "whipping boy" at court. With Christmas coming on, the whipping boy was looking forward to what Santa would bring him....but Tarby told him that "bad boys" as he wouldn't get anything from Santa. On the day before Christmas, the whipping boy was returned to his own parents for 24 hours, and he spent time telling them that he was whipped for the bad things that Tarby did. He wanted to know if Santa would still bring him something for Christmas, and his Dad assured him that he would, then went to see the King to beg him to do just that. The King laughed at the man....but the next morning, as the whipping boy woke up and checked out his sock, he saw a presents in his stocking....and the boy's father saw his stocking filled also: with the bloody corpse of the King!

A nicely dressed man offered a derelict outside a bar $10 if he'd agree to become a blood donor. The guy agreed and reported to the address given him.....he was admitted and fed a great meal, while talking to other derelicts who'd also accepted the offer. The men working the place had been paying $10 to get the blood, then selling it to a legitimate blood bank for $30, thus making a very nice living. Then one night a bum shows up, passes out and they take an extra pint out of him....and he dies. Other derelicts discover what's happened and no one darkens the doorway of that establishment again. The owners decide to take matters in their own hands.....they go down to the Bowery and find a hopeless drunk, knock him out, take the blood they need, slip the bum a five dollar bill and leave him in an alley. However, one night they bring in a rather heavy guy, lay him on a table and prepare to take the blood, when the man opens his red, fiery eyes and attacks them both. How could they have known this guy was a vampire?!

Retrieved from "https://heykidscomics.fandom.com/wiki/Vault_of_Horror_Vol_1_29?oldid=109869"
Community content is available under CC-BY-SA unless otherwise noted.