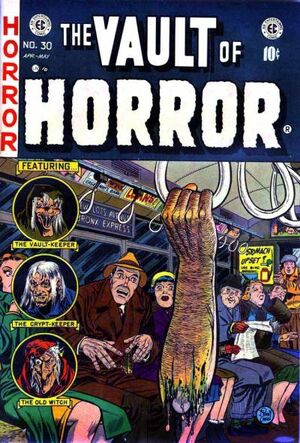 1 of 8
Add photo
Ed King was a charity racketeer out to milk the gullible. However, he couldn't get into the Blair Sister's home to milk them of their millions because they never opened their door to anyone. Then he saw a treed cat and one of the sisters trying to reach it, so he did the "manly thing" and rescued the cat and they invited him in. Learning they equally shared their wealth, he began to compliment them both, and they BOTH fell for him. Ed saw his chance....he would pretend to be twins, and each would bilk the young gals out of their money. It worked perfectly.....first marrying one of the girls and then marrying the other, and using excuses to be away a week at a time in order to be with his other wife. Then, he made his mistake....while sunning under a lamp, the sash of his robe rested on his back, leaving a wide strip of white. Because the sisters continually talked with one another, they discovered what was going on, and decided to deal with this bigamist. They took an axe and split him right down the middle....so each would have "half a husband"!

1 of 3
Add photo
Seven women had been murdered and the Police were baffled by the doughnut-shaped wounds all over their bodies, blood drained and traces of sea brine on their skin and clothing. Danny Hughes, crime reporter, was on the scene and mocked the Police for not having a suspect, who he thought was a vampire. Heading back to the office, Danny made his usual moves on the secretary, Pat, as he drove her home. Later, he sees a strange figure on the street, but pays no nevermind about him. The next day there was another murder....of Pat, the secretary, and Danny was blamed since he was the last to see her alive. At the station they began to grill him......until a call came in of another attack where the girl managed to get away, so he was released. Danny raced to the scene and interviewed the girl.....and she described the strange guy Danny had seen the previous night after dropping off Pat at her home. That evening, Danny spots the weird figure again and follows him to the City Aquarium, where he enters.....then he spots it: an empty fish-tank.....for an octopus! Now Danny knew what killed the young girls, and, as he whirled about, he came face-to-face with the creature, which grabbed him and began sucking the blood from his body!

Three medical students were riding the subway over to Coney Island to relax on the beach, and decided to play a joke before they got off: leaving a human hand and arm hanging from one of the overhead straps. The reaction made them howl. Later, on the beach, as the tide began to come in, there was someone buried in the sand with the legs showing who didn't move. One of the crowd came up and tried to rouse the person.....and pulls the legs only from the sand! Again, they howled in mirth. Later, they passed a photographer and decided to have a gag picture taken in front of a cut-out board that one put their head through. After it was taken, the head remained until the photographer came over and touched it....and it fell to the ground and rolled away, shocking everyone around. The med students roared with laughter! Later in the day, as they returned to the medical school campus, they seriously began to wonder what would happen when it was discovered parts of a cadaver was missing. So they returned to the campus morgue to get the remaining body parts and dispose of them, not noticing a pile of coiled-up intestines that were moving toward them. The next morning, when the Police came to the college to investigate the "body part gags" of the day before, they found the three boys dead in the corpse refrigerator room......coils of intestines wrapped around their necks!

Appearing in "Notes to You!"Edit

Synopsis for "Notes to You!"Edit

Judson sat at his desk reading an anonymous letter telling him that his wife Eleanor was having an illicit affair with one Andrew Cookson. Later he confronted her about it and she said that she didn't. Not believing her, he stomped out, only to come back the next morning to get his clothes, and discovered her corpse next to a revolver.....and to discover she was telling the truth. Another individual, Horton Cox, read an anonymous letter telling him that a trusted employee of his stole $10,000 from him, so Horton confronted the man, who denied it. As Horton reached for the phone to call the Police, the employee leapt out the window to his death, only to find out later the man was innocent. Elsewhere, Averill Minton, bank President, was informed that depositers were withdrawing all their money from his bank, all due to anonymous letters each had received saying Minton had been embezzling bank funds. Distraught, he killed himself. Elsewhere, Ambrose Baldwin walked into the candy store to get a bottle of ink from the owner, Mr. Poppin. This disagreeable old man was despised by all in town, especially so by Poppin. As Baldwin walked into the front door of his home, he decided to get even with the man....by writing an anonymous letter to the City Health Commissioner, asking him to investigate the candy store as the rotten, rat-infested place that it was [not]. When confronted, Poppin and the commissioner began to realize that all these recent events were connected by these anonymous letters, and Poppin knew the answer, for he had given Baldwin a bottle of disappearing ink....and the letter sent to the commissioner had now become blank. The men headed over to Baldwin's home and confronted him.....with pens filled with lye, and they kept injecting him with these "poison pens" until all that was left of Ambrose Baldwin was a puddle of putrid flesh, dissolved by the lye!

Retrieved from "https://heykidscomics.fandom.com/wiki/Vault_of_Horror_Vol_1_30?oldid=109870"
Community content is available under CC-BY-SA unless otherwise noted.