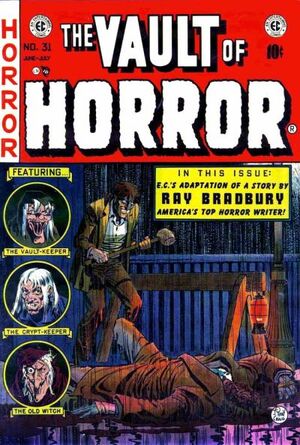 1 of 4
Add photo
The man walked along in the rain to a bridge, a bridge he intended to jump from to his death at age 29. He was a lonely, unappreciated artist who was going to end it all when a car slammed into a barrier and from the crumpled wreck a woman staggered out. Inspired, he ran home to paint the scene, and later sold it to a wealthy man. But then the inspiration disappeared and he became forlorn again and began to walk the streets...until he saw another accident and he got inspiration to paint once again. And once more he sold it to the same gentleman, who wanted yet more of the sadistic scenes he painted. Then one day a beautiful girl knocked on his door, fixed her leaky pipes, and then used her to paint softer scenes. They fell in love and were going to be married, until he received a message saying she'd been critically injured in an accident, and it would cost $3000 for the operation that only one surgeon could perform. He went back to the bridge he'd nearly jumped from and horribly killed a man and painted the scene....but this time, the wealthy man wouldn't pay the price, so he killed him and took the money. Rushing to the hospital, he threw the money at them and demanded the operation be done. Unfortunately, the man the artist had brutally killed on the bridge was THAT doctor who was to perform the operation.....so the artist sat down, dejected, and waited for his true love's life to ebb away forever!

Appearing in "A Peach of a Plot!"Edit

Synopsis for "A Peach of a Plot!"Edit

Lieutenant Dolan looked at the roots of a peach tree that held the corpse in its roots, and ordered the corpse and tree be taken in for autopsy. He turned to Michael Lane, the murderer, who now confessed to why he did the act. Her name was Sarah, young, wealthy and beautiful, and he got what he wanted from her until she realized that he didn't love her....just her money. There was a terrible fight, then talk of divorce. Finally one night, as she ate a peach, he killed her, buried her in the garden and destroyed all of her possessions, giving the impression she had left him. The problem was that she has swallowed the peach pit, and from that pit, a peach tree began to grow. Seven years passed by and finally the tree bore fruit.....Lt. Dolan came by the house, hoping to trap Lane into admitting the act he suspected him of. Then as they walked into the garden, Lane reached for a peach and bit into it....quickly spitting it out. The Lieutenant now knew where to look for Lane's wife's body, for that peach had blood inside it!

The little boy kneeled next the water at the beach, calling for Tally, a young girl who swam out into the water and drowned. He remembered back to earlier days, to days of love, to days when they built sand castles on that beach together. Now, he built a half-castle, and called out to the waters for Tally to come and build the other half. Later, he boarded a train to go home. Years passed....he got married and they took a trip to that same beach. He suddenly spotted the old lifeguard and walked alone to talk with him, and the old man showed him a sack with a body in it....it was Tally. Once more the young man returned to the beach, built an entire sand castle and walked back to his wife, Margaret, leaving the past behind.

Appearing in "One Good Turn"Edit

Synopsis for "One Good Turn"Edit

Excitedly, Jennifer called to her husband when she came home, but she found him asleep in bed, so he cleaned up and dressed for bed herself. As she slipped underneath the covers, she began to relate the day's wonderful events, how she met an old friend, Bert, in a shantytown, and decided to make him happy once again....by killing him with a knife! Then she met another acquaintance, Grace, whose husband had left her, so she had made her happy, too, by crushing her skull in with a rock! On the way home, she came across a blind man selling pencils, and decided to make him happy as well by taking his hand and pushing him out into the street in front of a speeding car! And then there was an old woman who was waiting for someone she knew would never return, so Jennifer pushed her into the water and she drowned! Then Jennifer reflected on the day four months earlier when her husband Edwin crying in bed, so she mixed up a little cyanide in his hot chocolate, and had him drink it to make him happy. Her thoughts were suddenly interrupted by a pounding on the door and she arose from bed to see some detectives wanting to talk with her, then they smelled something terrible and headed for the bedroom, and when they entered, there was his rotting corpse lying there!

Retrieved from "https://heykidscomics.fandom.com/wiki/Vault_of_Horror_Vol_1_31?oldid=109871"
Community content is available under CC-BY-SA unless otherwise noted.