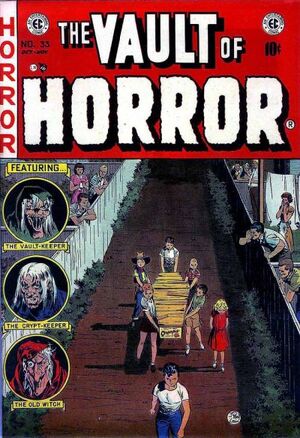 Appearing in "Together They Lie!"Edit

Synopsis for "Together They Lie!"Edit

Agnes stood weeping over the grave of her former employer, thinking back on the night that she alerted her boss to the fire at his boat house....in which his wife was staying, and whose corpse was found among the ashes. Her boss, Mr. Horton, mourned......had a tombstone made w/her and his name on it, then went to his his attorney, Alex Fairchild, about the will. Horton said he'd probably give all his money to charity rather than name a new beneficiary. Later Agnes told her boss that his wife had been cheating on him w/Fairchild, who was to meet her at the boathouse the night of the fire, and even offered some "proof". That night Horton went out to the cemetery and chiseled off half the tombstone w/his wife's name on it, then committed suicide, leaving a new will naming Agnes as beneficiary. Resuming her thoughts, Agnes left the grave of her boss w/Fairchild and together they celebrated the hoax they had finished pulling off. That stormy evening, sitting in Horton's [now Agnes's] home, the pair were suddenly interrupted by the corpse of Horton crashing in. The next morning, the dead bodies of Alex and Agnes were found on top of the Horton grave.....the tombstone carefully restored to what it had been!

Appearing in "Let the Punishment Fit the Crime!"Edit

Synopsis for "Let the Punishment Fit the Crime!"Edit

The children came marching down the street carrying a wooden coffin, and the neighborhood buzzed about it. Yet the town undertaker, Mr. Drapper, was surprised the kids were doing what they told him they would do. Thinking back, many of the town's people had been questioned by the same kids about all sorts of things having to do with death and funerals, and were fascinated about a man dying in the electric chair. But the one thing they really wondered about was what the punishment would be for robbery and kidnapping. The local lawyer explained that kidnapping could be punishable by death, but not robbery. Suddenly, a mother came up screaming to townsfolk, telling them that her son was missing.....that he had stolen another child's doll and had refused to give it back. Then.....they all looked in horror as they gazed over at the kids, who had just finished burying the coffin!

Appearing in "A Slight Case of Murder!"Edit

Synopsis for "A Slight Case of Murder!"Edit

Doc Swanson arrived in town by train and gazed up at the abandoned mansion on the hill and just knew it was the answer to all of the killings. He saw the Sheriff and explained why he was there and who he thought responsible for the crimes. The Sheriff laughed in his face, saying the murders had to have been committed by something inhuman, and explained how each of the bodies were found, throats slashed, and door locked. Sam said for the Sheriff to meet him the next night at the foot of the hill where the mansion was located. Sam then went to the newspaper office, where the editor, who knew him from years earlier, showed Sam the newspapers recounting the murders. Now convinced, Sam met the Sheriff the next evening and as they approached the mansion, Sam recounted the event that led to the present situation: how a woman's deformed baby born in that mansion was the murderer. The Sheriff suddenly lunged at Doc, wanting to kill him, but the townsfolk entered and took care of the Sheriff, whose body was an artificial framework....housing that deformed child!

Tony lay dying, looking up at the marionettes he had carved with his own hands, telling them that the woman he loved no longer cared for him. His mind recalled the days when he first began putting on his shows and how he met Nora.....who could give him the love that his marionettes could not. They soon married....but then Tony was diagnosed with a bad heart and he had to quit performing. Soon money became tight and Nora told bed-ridden Tony that she was going to sell his marionettes to raise money and he said no!. She then revealed that she didn't love him and had only married him for his money! He began to have a heart attack.....she left laughing. Now Tony looked up at his wooden friends lamenting that he would die unhappy and he fell asleep. When he awoke, he saw a woman's figure enter his room.....it was Nora and she came over to him, silently, and he grabbed her and kissed her, knowing that he could now die happy in the arms of the woman he loved. The next day, they found their bodies, side-by-side.......but Nora's had been dismembered and reconnected by strings.....strings tied to the marionettes' hands!

Retrieved from "https://heykidscomics.fandom.com/wiki/Vault_of_Horror_Vol_1_33?oldid=109873"
Community content is available under CC-BY-SA unless otherwise noted.