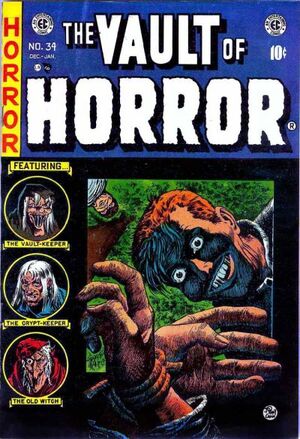 1 of 4
Add photo
As the rain fell in sheets, Hartley stood over the open coffin as he nervously and sickeningly watched people run up to the corpse and do terrible things to it. Hartley discovered that was the only way the understaffed guards at the facility could keep the inmates in line. At dinner, the guards told him that this man [whom he was replacing as head master] was killed by the inmates for vowing to take this privilege away from them.....and he nervously looked at the dining inmates as they stared at him. Hartley excused himself from dinner and went to his room, fearing the inmates hated him and would kill him. He lay back on his bed and gazed up at the skylight. Out of a deep sleep, Hartley was suddenly awakened by the inmates, who grabbed him, stuffed rags into his mouth and placed him in a coffin and placed a lid over it that had a window cut out so that he could see. One pinched his nose and then they carried him out of the facility and to the cemetery....things got blurry and he "woke up" back in bed, still staring at the skylight, nervously believing it had all been a bad dream. That is, until he saw an inmate's face suddenly appear over head and a shovel full of dirt hit him in the face!

Appearing in "While the Cat's Away"Edit

Synopsis for "While the Cat's Away"Edit

John & Frank had been working their little travel agency scam for almost a year. They would book trips for wealthy clients, then clean out their homes of valuables while they were away. This time they scheduled a little trip for a Mr. Kingman, who lived alone in the suburbs, and when his plane for Ecuador took off, they went over to clean out his house. The place was a rundown wreck, with nothing of value they could see. They went down the cellar steps and found a metal door warning them not to enter, signed "T.C.K." They broke in and entered a library and founded a secret passage, which they entered, and came upon a group of zombies. They fled down another passage and ran into a room of vampires, then headed down yet another hall and ran into werewolves and then into another with mummies! By the time John and Frank reached the front door entrance, they were stark raving mad......and never noticed that the owner had just returned: the Crypt-Keeper!

Nervously, Hubert waited to see Miss Jackson about the Llama Cigarette account, and when he did get to see her, he proffered ideas to her cocerning new revolutionary billboard ads using live steam. Even though she didn't go for it, she did come on to Hubert, a shy bashful man around women, and invited him out to dinner. There they discussed his idea.....an idea she said she would pass off to her superiors as "her" idea, and any monies that came in would be handed over to Hubert. He agreed and later was amazed to see the billboard going up using his idea, so he took Lorna over to see it. It was then and there he found out he'd been played for a sucker....the bosses believed the idea was hers and she was taken care of financially, and Hubert got.....well, the short-end! Just then, she lunged at Hubert and pushed him into the giant steam chamber, killing him instantly. Later, at the dedication of the billboard, she stood under the face of a giant figure that blew smokes rings [of hot steam] into the air, and, curiously, one of them floated down at her, enveloped her and scalded her to death!

Appearing in "Where There's a Will"Edit

Synopsis for "Where There's a Will"Edit

The relatives of Harold Farber were gathered in his house awaiting his certain death while Dr. Crotty and lawyer Walker went upstairs to see the old man, and tell him what vultures they really were. While old man Farber didn't believe them, he asked what they advised doing with his estate funds, and they recommended a charity. He agreed....IF they could prove what they said. They all agreed to stage Farber's death and then let him listen from inside his coffin at what his relatives were saying about him. Before the relatives arrived at the funeral home, Farber eased himself down into the casket w/a microphone to listen in, and he heard enough. When the lid was opened, he jumped up at them, told them off and signed over his estate to the Happy Home for Orphaned Children.....then fell over dead. All those assembled looked at the corpse, then began to laugh, as they greeted the President and Treasurer of that charity: the lawyer and the doctor, who thanked the "relatives" whom they had hired to play out this little scene!

Retrieved from "https://heykidscomics.fandom.com/wiki/Vault_of_Horror_Vol_1_34?oldid=109874"
Community content is available under CC-BY-SA unless otherwise noted.