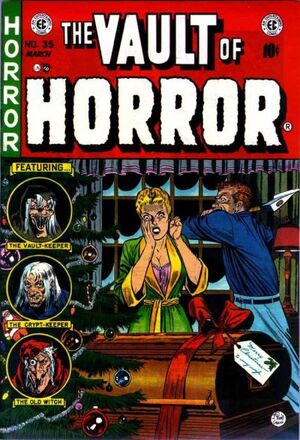 Appearing in "And All Through the House"Edit

Synopsis for "And All Through the House"Edit

A woman kills her husband on Christmas Eve, and hides the facts from her young daughter. She is then stalked by a psychotic serial killer dressed as Santa Claus, who has already killed several women on that night. The woman cannot escape, and cannot call the police because of her husband's body that she dragged to the yard. The story ends with the daughter thinking the killer is Santa and letting him inside the house to the shock of the mother who has gone looking for her.

The expedition, led by Professor Burton, neared the Pyramid of Khafra, the scene of the disappearance of a previous expedition. As they passed by the Sphinx, in legend called the "Father of Terrors", he told the accompanying journalist, Miss Allen facts about the previous expedition. Reaching the entrance to the pyramid, all entered to make a preliminary investigation when suddenly the massive stone panel they had entered through closed behind them, and a booby-trap killed of one the explorers. The group headed down some passages to find a possible exit, and as they proceeded, one by one members of the group were killed, leaving only Burton and Allen alive. As they made their way deeper into the pyramid, Burton told her that legend said the sphinx actually lived at one time, but Allen pooh-poohed the idea. Suddenly they came upon King Khafra's tomb, crawled through a passage and reached the interior to find all of Khafra's wealth and some hieroglyphics stating the legend of the sphinx was true.....just before the living sphinx sprang out and killed them!

Helen gazed out the window of the room she shared w/Joyce as the latter bid goodnight to a Mr. Boxer, the man she told Helen would help her to win a beauty contest the next day: "Miss Corpse of 1954"! Helen decided to play a trick on her roomie: she'd drug Joyce's drink w/sleeping pills, take a note Boxer had given to Joyce and appear in her place the next day. Helen gave the note to the man in charge, got into her suit and won the contest, being told to report that evening to an address for the award presentation. Arriving home, Helen found Joyce dead in bed [from an overdose of those pills], she called the Police and reported it as a suicide. Later Helen reported to the address she was given, but told the people there she had taken Joyce's spot.....a bad move, since she discovered that the winner had to ACTUALLY be a corpse to win. That's the last she knew as the men came at her with scalpels, rubber tubes and embalming fluid!

The little boy celebrated the best Christmas he ever had because he could now see! Born blind, all he ever knew was the love of his mother, and the companionship of his teddy bear. One day, however, his mom introduced the little boy to his new step-dad.....a man who made fun of the little boy and mistreated his mother. He always said that the little boy had "shoe-button" eyes, just like his teddy. One day, the little boy's mother became deathly ill from over-work, and he asked his step-dad to help her. He abused her and took the boy's bear and ripped the eyes off of it. Later he asked his mom of she'd think Santa would bring him a new pair of eyes for the bear, and the mother, in spite of her condition, went out and got new buttons and sewed them on for the child. When the step-dad later found the woman dead, he cursed her still form and slapped the little boy around, knocking him unconscious. Early Christmas morning, neighbors heard screams coming from the house, and when they entered, they found the dead form of the step-dad w/his eyes replaced by buttons and the bear sitting near-by, button eyes missing....and smiling. The little boy? Well, he could now see......from a special place up in heaven!

This is my favorite EC cover.