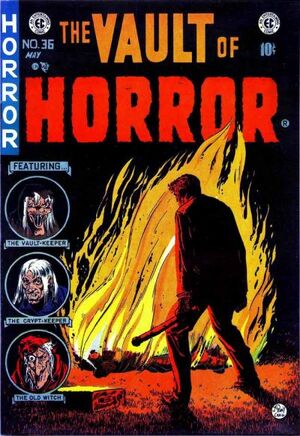 1 of 4
Add photo
Larry stood there in the dark, sweating profusely, waiting for them to come: his wife and her lover. He remembered the night he caught them in each other's arms....how he made them take shovels and forced them to dig a grave, made them get in and how he covered them over with the dirt....alive! Then how he returned to the lodge and tried to make a get-away in the car....but the battery was dead. So he took the car of his wife's lover and headed to town to get a new battery, but couldn't get one. How he later drove lover boy's car to the other side of town and how he reported his wife's "disappearance" to the Police. Yet, two weeks later....no one had found that car or them. So he drove back to the lodge where his car still sat....then he remembered that his wife had a spare set of keys in her purse, so he headed back to the grave to dig up the bodies so he could get the purse.....but the grave was empty! As he headed back for the lodge, he saw two figures following him, so he ran to the lodge as fast as he could.....and lay in wait, believing them NOT to have died in that grave. Now he heard someone enter the room and as he snapped on the flashlight, he saw two rotting corpses coming at him, and he fired at them....the last thing he ever did!

Eric was coming home to Blumstedt with his new wife.....who was not the girl to whom he had been betrothed since childhood. As he entered the house, he was met by his former betroth, Alicia, her Mom and his Mom, all of whom harshly berated him for bringing shame to them all. Eric's mother soon passed away, but Helena wouldn't go to the funeral. Days later, the ladies from the local church saw Helena and told her not to attend their meetings....and the leader of that group soon died. Talk began to surface saying Helena was a witch, and they thought it true when Helena walked down the street and a woman, Alicia's mother, fell dead. A mob formed and went after Helena, and, when Eric tried to intervene, they killed him and began stoning Helena to death, when she stood and chanted a few words and all the people turned to rats and scurried away. In the midst of it all was the most ugly and hideous creature of them all: Helena....the witch!

Chen begins his tale while frequenting an opium den, a place where he can have drug-induced dreams that give him power and importance. But a visit to this drug den profered a dream of his wife dying, and, sure enough, she did and he had to assume the responsibility of caring and providing for his children. Yet, his son took up the slack and provided until he was drafted into the war....and later that night, Chen yet again visited the drug den and had a dream that his son would die in battle.....and he did. Then his daughter was engaged to a man that he didn't approve of.....and another trip and dream later, that young suitor was dead. To make matters worse, his daughter was blamed for the killing and was put to death for it. Now, Chen lay once again in the opium den.....to have yet another dream!

It was 1900 and little Dickie lay in his bed until he heard a sound he thought was his Mom and Dad returning home. Instead it came from outside, and he followed the sound until he saw a man viciously beating a woman to death, and then advance on him, grabbing him about the throat until he lost consciousness. When he awoke, his parents were there with Constable Phyfe, who found a scorched area near the boy. The crime was never solved and fifteen years passed....the young man grew up, married, but later discovered his wife was cheating on him. So he later confronted his wife, took her out into the woods and began to beat her. He looked up to see a young kid watching and attacked him....then realized that the young kid was actually HIMSELF! He remembered the event 15 years earlier and that there was a shot, so he searched his wife's body and found the gun. Satisfied that his wife could no longer shoot him, he drenched his wife's body in gasoline and set it afire, Then a shot rang out and he staggered, falling onto his wife's blazing body. Just then Constable Phyfe pulled him out of the flames and the two talked, Tom discovering that, back then, the little boy had a scrap of paper on him that carried TODAY'S date, and he came back to the scene to investigate!

Retrieved from "https://heykidscomics.fandom.com/wiki/Vault_of_Horror_Vol_1_36?oldid=109876"
Community content is available under CC-BY-SA unless otherwise noted.