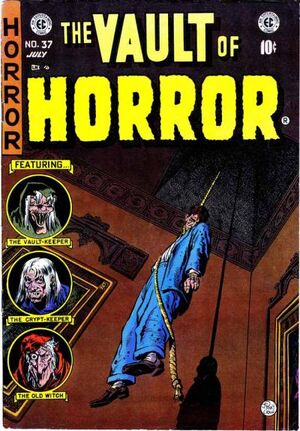 1 of 4
Add photo
Jerry Adams arrived in a small town on a rainy night, checked into a motel and headed out to see a movie. He hits a detour and turns off on a dirt road [which isn't on any map] and gets lost, gets out and walks a it until he spots a house. As he approaches it, he sees that a party is in progress, and is invited to join in. He thoroughly enjoys himself, dancing the hours away w/his beautiful hostess. Then it dawns on him that the band plays only one tune the entire night, and his hostess tells him that it was the tune being played on the night of the fire. When he tells the crowd his name, they suddenly turn on him.....the flesh falling from their faces, as they explain that, back in 1884, his hostess was celebrating her engagement to Roger Wertham, but a rival suitor, named Adams, set fire to the house, killing everyone in it. Since then, on the same night, all the people "return" to re-enact that night until their deaths could be avenged. Now, that Jerry Adams has shown up, they now avenge themselves on him, his ancestor!

Emil and Anna said their last goodbyes to each other in the park.....their affair was to be over. But Emil decided to end it permanently: he killed her, and her husband came along, witnessed the act, stuck Emil and carried his dead wife away. But he returned and grabbed Emil and turned him into the Police....a trial was held and Emil was sentenced to have his head chopped off. Little did he know his executioner was Heinrich, the husband of the dead woman, and he proceeded to tell Emil how a person dies at the block. Emil lost consciousness and dreamed of that gory moment....then suddenly awoke. For days he agonized, until the day he decided to accept his fate and went to the block cheerfully. When Heinrich saw this, he lost his temper....killed Voight, then swallowed poison to be with his Anna. Suddenly, a voice called out to Emil Voight in a strange afterlife.....the voice of Heinrich, who proceeded to kill Emil again and again and again.....for all eternity!

Trustee of the lonely mansion, Jefferson Bates, entered and conversed w/the new caretaker, a Mr. Dench. He explained that the previous owner, a Mr. Avery, wealthy & eccentric, hated to waste money and told his servant as much. He was soon found hanging from the bell rope in the home's tower, but his companion was not found guilty of the crime. Ever since, the mansion lay deserted. Bates quickly told Dench the repairs that needed to be made, then left. Dench decided to take a tour of the home, but became spooked when he saw some type of spirit, and ran to his room, vowing to quit the next day. Suddenly he heard footsteps....and his candle went out. The next day, townspeople were drawn to the place by the sound of the bell tower pealing away, and they entered Dench's room: found Dench dead of a heart-attack on his bed, the corpse of Avery's companion hanging from the bell tower rope, and the rotted, stinking corpse of Avery at his feet!

Lionel Hart, plainclothes detective, stared at the $10 bill in his hand and his thoughts raced back to when he had just started on the force. He made many arrests, not listening to phony stories from the guilty....but one day he caught an old lady for shoplifting, and she pleaded for him to understand that the food she took was for her sick, paralyzed husband, Henry. But Hart wouldn't listen and he took her in, got a conviction and had her thrown into jail. But curiosity got the better of Hart, so a month later he decided to check the woman's story out, and went over to her home.....and found her husband dead....in his wheelchair! Hart blamed himself, but just then, he whirled to see the old lady behind him enter and thank the Lt. for keeping her husband company. Hart offered her money, which she wouldn't accept, but she did fix him tea....w/rat poison, and as Hart sat there, paralyzed himself, the old woman came at him w/a huge knife, and began cutting the flesh first from his feet, mumbling something about Henry needing "something to eat!"

Retrieved from "https://heykidscomics.fandom.com/wiki/Vault_of_Horror_Vol_1_37?oldid=109877"
Community content is available under CC-BY-SA unless otherwise noted.