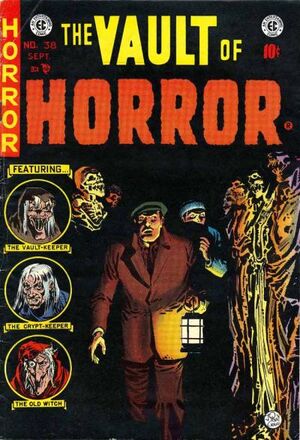 Appearing in "Any Sport in a Storm"Edit

Synopsis for "Any Sport in a Storm"Edit

1 of 4
Add photo
Lon made his way along the beach and past Smuggler's Caves as the stormy night raged on, then entered Ratsmouth Inn when O'Rourke was caring members of Shannon's crew w/tales of stormy nights like this when Shannon lost his father at sea, supposedly to the "Sea Hag." Shannon knocked Tim to the floor and told the others about a ship a mile off shore loaded down w/expensive goods, ripe for the taking. But only one volunteered to go w/Shannon, and the two cast off into the restless waters. Those waters threw them off course until they spotted a lighthouse and landed, meeting up w/the lighthouse operator and his daughter. Shannon made a move on the girl that night, then went to his partner and told him that they were leaving. They jumped in their boat and back into the water....water which began to tear the boat apart. Then suddenly, the girl came out from a lower part of the ship and came at him, wrapping her tentacles about him and throwing him into the water w/herself. Yes, Shannon found out too late that the stories of a Sea Hag were true!

The two men finished digging up a corpse for Dr. Karolyi, but the man refused their efforts, so they went out to search for more bodies that the good doctor's students could use. They found a mausoleum w/many bodies interred, so Nadyi left to get a larger wagon, leaving Janos there. Upon his return, Nadyi admonished Janos for falling asleep on the job, but the two grave robbers loaded the wagon to the hilt anyway and returned to their residence to await the next day to deliver the bodies. However, that evening, the coffins suddenly opened up and the corpses inside advanced on the surprised pair, who rushed out of the room and bolted the door. Nadyi told Janos that he knew what was happening....that the corpses were vampires. When asked how he knew, Nadyi, fangs bared, advanced on his partner, proving his point!

Pietro grabbed the sack of silver as Gino followed him out of the store and headed for their hideout. The take was good, goods worth 4000 lire that some American might purchase for much more. Deciding to hide the swag in the Catacombs, they took their wine w/them and headed down into the eerie place, lined w/mummies of the long departed. Reaching their desired spot, Pietro suddenly plunged a knife into the back of his partner, for his greed was too much. Grabbing the loot, he headed back down the unlit passages toward the exit, lamp in hand, but became disoriented and hopelessly lost. He found his way back to Gino's body, and, picking him up, and begging the man to show him the way out as Pietro carried him along. And then......the lamp's light went out!

Appearing in "Out of Sight"Edit

Synopsis for "Out of Sight"Edit

The circus barker began encouraging the crowd to pay to see the mental marvel of the age, the Great Brain, a man, once blindfolded, can identify any object being held up by his slow-witted partner, Benny. Then a mistake occurs and the Brain berates his partner privately, and Benny threatens to kill him. Benny then goes to see the only person who really cares and understands him: Hulda. But Evans catches them and Benny relents and goes back w/him, but still suffering through berating again and again. When Benny tells Evans that he and Hulda are going to wed, the Brain heads straight for her. Benny follows and finds Hulda in Evan's arms, not understanding that Evans is forcing her to his will. A few minutes later, Benny exits the tent and addresses the crowd, lifting a red oozing mass up for the people to see, and tells them: "Here is the one and only....Great Brain!"

Retrieved from "https://heykidscomics.fandom.com/wiki/Vault_of_Horror_Vol_1_38?oldid=109878"
Community content is available under CC-BY-SA unless otherwise noted.