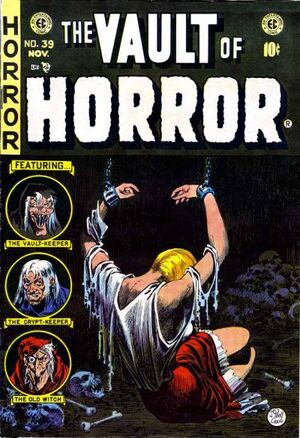 1 of 4
Add photo
As Edward was driving through a backroad in Louisiana, his car overheated and he was forced to stop and seek out help. He saw a stately mansion there is the bayous, but when he entered, he found it burnt out inside. Yet a lovely lass named Eloise welcomed him and began to tell him of the home's history [as he was a magazine writer feigning interest once he saw her]. She told him her entire family had died in the fire, then showed him around. Edward encountered several near-fatal accidents while on this journey, but came under her spell and discovered to his horror she wanted him dead in order to join her, since she was already dead. He fled the home....but the longing became too great and he headed back to the mansion, where she was waiting for him!

The three actors traveling through misty countryside suddenly found themselves at the stage entrance of the mysterious Woltam Theatre, where a rehearsal of Hamlet was in progress, which was stopped when a vital prop turned up missing. Winton stepped forward to offer his acting services and was accepted, leaving the other two jealous.....so jealous that Blye snuck into the dressing room and killed his partner. Unfortunately for him, the director now chose Nash for the role, and again Blye killed his other partner and hid the body. The director then had no choice but to allow Blye the role, and as he prepared for it, an old stage woman showed the man something interesting: a sack full of human heads! Frightened, he ran to his dressing room. Suddenly several actors entered and asked if he was ready for his part in the play. When he asked what the role was, he was referred to the scene where Hamlet holds up the skull of Yorick, and they told him that someone had kept stealing the skulls, so...........as Blye screams, the scene lastly shifts to the sign above the building's entrance: Woltham Insane Asylum for Actors!

King Horace was called to the cell of a lovely lady by Sir Benjamin and he asked her why she wanted to see him. Alicia told him that she was controlled by the devil and wanted to be purged of him. So the King went to see his court wizard who said he could do the difficult task, but he had much difficulty, and was given seven days to succeed or lose his head. Meanwhile, the King had fallen in love w/Alicia, which complicated matters. The young lass was growing weaker and in pain while the wizard continued to use acupuncture treatments on her. One day he claimed success and told the King about it. King Horace then had the maiden dressed royally and ushered into his private chambers. Suddenly he turned and sprang at her, spittle dripping from his fangs....for he had been waiting seven long days to feast of her flesh, for his werewolf hunger pangs must be satisfied!

Appearing in "All for Gnawt"Edit

Synopsis for "All for Gnawt"Edit

Millie lay on her couch drinking herself into a stupor, lamenting that her previous four husbands had not left her w/the funds she craved. To find another husband would be difficult considering her looks and weight, but then she spotted an ad in the lonely hearts magazine of an elderly gentleman who wanted a woman who would learn to love him. She arrived at the home, fit to kill, and was ushered into the decrepit home overrun w/rats. Disgusted, she leaves for the nearest bar where she learns the old geezer is worth $400,000. So she swallows her pride and returns....that is until she finds his money. Day by day goes by until she one day demands the swag and he tells her it's in the cellar. She goes down and gets caught in a rat trap, and suddenly Alvin appears, smiling, and showing her the bodies of his previous wives who also wanted his money. As she stood there, caught his the trap, Alvin cheerfully went upstairs to right another ad for the lonely hearts magazine as the screams of Millie drifted up the stairs as she was being devoured by the rats!

Retrieved from "https://heykidscomics.fandom.com/wiki/Vault_of_Horror_Vol_1_39?oldid=109879"
Community content is available under CC-BY-SA unless otherwise noted.