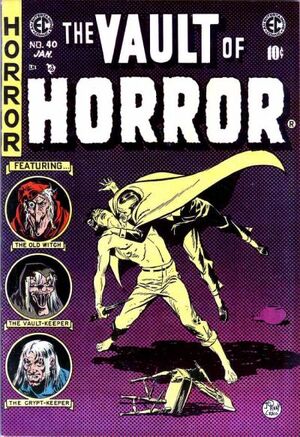 1 of 4
Add photo
Ned stopped his wagon when he saw townspeople throwing stones at old Mose, a man they thought worshiped the Devil since he lived in the Black Church. He chased them off, then invited the man to his home, where he was welcomed by Ned's wife. The next day Ned went to town for supplies and the folk there warned him of the old man, but he paid them no mind. Late that night, he heard a noise and discovered old Mose coming in, supposedly from a late night walk. But the townsfolk told Ned the next day about sacrificial killings that had occurred in the area, the latest being last night, and once again they blamed Mose for it. Ned covered for Mose, but rushed home to find the still form of his wife on the floor and Mose in the doorway....with scratches to his face. Ned pounced on Mose and beat him to death, but then heard the last words of his dying wife tell him that Mose was protecting her from an escaped prisoner, whose still form lay outside the door!

Appearing in "An Harrow Escape!"Edit

Synopsis for "An Harrow Escape!"Edit

Captain Grady's ship approached the seemingly derelict "Sea Witch", boarded her and found the entire group on board slaughtered....that is, except for one Kip Fowler, who was barely able to tell them the story of how the ship had been caught in a bad storm and forced ashore. They had spotted a castle where they were met by a strange man, who invited them in out of the rain. That night, Kip roamed the castle and found coffins! He hurried back to the room of a female passenger and saw a vampire bending over her, and he drove a wooden stake thru its heart as it jumped at him. The passengers then headed back to their boat and shoved off, but Kip discovered the woman had already been bitten and was a vampire herself. At that point, Fowler passed away, and the Captain & Lt. Morton noticed the female lying near, and the Captain raised a wooden stake and plunged it into her heart. Both went up on deck....then Morton remembered that she had bitten Fowler, and both whirled to see the vampire....Fowler, leaping at them!

Felix & Lila listened to the crowd screaming for blood as they watched a cock fight, and Felix thought it was inhuman. Nearby, they was another fight brewing....between vicious dogs, and a similar argument brewed between Aaron & Beatrice Scott. Later Aaron & Felix compared notes and discovered that the two couples were trying to outdo each other to draw paying crowds. Later the two women ran into each other and a slow hatred developed between the two. To the husbands involved, there was only one solution to their "problem" women and competing "businesses": they put the two women into the arena and let them go at each other!

Appearing in "Ashes to Ashes!"Edit

Synopsis for "Ashes to Ashes!"Edit

Emil sat at his desk in the old Frankenstein mansion writing in his diary about how his infamous Father had tried to create life from a miasmic swamp. Only partially successfully, it was Emil who took over the experiment and successfully created a newborn infant. However, he didn't know if this infant would one day be able to reproduce. He took the child to a local hospital, switched it for a newly dead infant, and then followed the progress of the child from there. The young lady, Louisa, grew up and fell in love with Karl, but her Father, drunk as usual, came into the engagement party with a gun and tried to kill the young man. His shot went astray and hit his daughter in the stomach and she fell to the floor, her body reverting to the greenish-black ooze it had been taken from in the swamp years before. Emil has his answer!

Retrieved from "https://heykidscomics.fandom.com/wiki/Vault_of_Horror_Vol_1_40?oldid=109880"
Community content is available under CC-BY-SA unless otherwise noted.