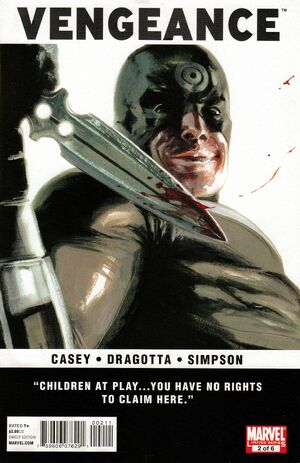 Appearing in "World on Fire"Edit

THE LIFE OF BULLSEYE HOLDS THE FATE OF THE MARVEL UNIVERSE! But isn’t he already dead? That won’t stop the Young Masters from hunting down his legacy. Meanwhile, Ms. America and the Teen Brigade uncover a mystery dedicated towards throwing off the balance of Good and Evil on earth – a mystery that involves THE IN-BETWEENER! By Joe Casey (AVENGERS: EARTH’S MIGHTIEST) and Nick Dragotta (FANTASTIC FOUR)

Retrieved from "https://heykidscomics.fandom.com/wiki/Vengeance_Vol_1_2?oldid=1747809"
Community content is available under CC-BY-SA unless otherwise noted.