Start a Wiki
Part of the 'Killed, Not Dead' story arc 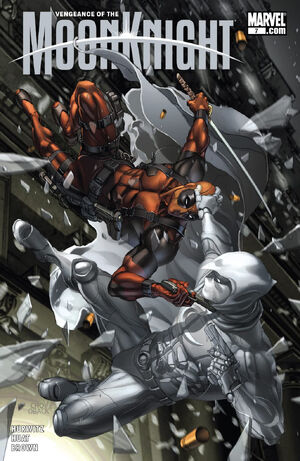 Guest-starring Deadpool! Herman Goncharenko lies at death’s door, wasting away of cancer, but someone wants him killed, not dead. Someone desperate enough to hire a certain mouthy mercenary to do the job. Gonchrenko’s only hope just might be the reformed Moon Knight – if he’s able to withstand the force of nature known as Deadpool, and if Goncharenko is, indeed, worth saving.

Retrieved from "https://heykidscomics.fandom.com/wiki/Vengeance_of_the_Moon_Knight_Vol_1_7?oldid=1466039"
Community content is available under CC-BY-SA unless otherwise noted.