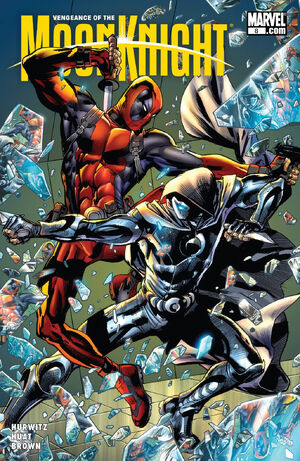 “KILLED, NOT DEAD,” Part 2 It’s crazy versus crazier when Moon Knight squares off against Deadpool! Herman Goncharenko lies at death’s door, wasting away of cancer, but someone wants him killed, not dead. Someone desperate enough to hire the Merc with the Mouth to do the dirty deed. Gonchrenko’s only hope: the reformed Moon Knight. But is he in Deadpool’s weight class? Heck, is anyone?

Retrieved from "https://heykidscomics.fandom.com/wiki/Vengeance_of_the_Moon_Knight_Vol_1_8?oldid=1466041"
Community content is available under CC-BY-SA unless otherwise noted.