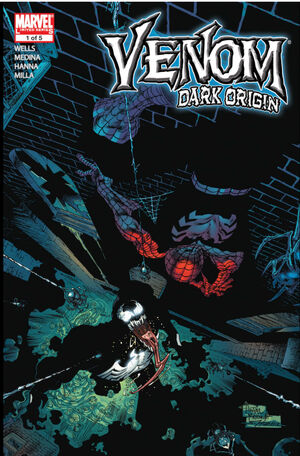 I'd take fifth home. I've been patrolling it pretty hard the last couple of nights.

On the unlikely day when an embittered, washed-up journalist met a spurned symbiotic organism from an alien planet, one of Spider-Man’s greatest enemies was born – a force of evil and vengeance like no other in the Marvel Universe – VENOM! But is it as simple as that? Discover the true, twisted roots that gave rise to a lifetime of malevolence for Eddie Brock…AND the symbiote! Writer Zeb Wells (AMAZING SPIDER-MAN) and artist Angel Medina (SENSATIONAL SPIDER-MAN) shed a little light on one of Marvel’s darkest monsters!

Retrieved from "https://heykidscomics.fandom.com/wiki/Venom:_Dark_Origin_Vol_1_1?oldid=1466292"
Community content is available under CC-BY-SA unless otherwise noted.